Lakers Injury Update: Rajon Rondo Expected To Be Out 4-5 Days With Finger Fracture 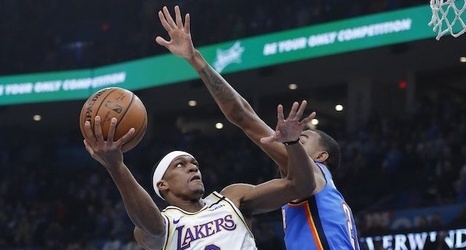 After re-signing with the Los Angeles Lakers in 2019 NBA free agency, Rajon Rondo has had an up-and-down second season as their second playmaker.

However, in perhaps the best win of the 2019-20 NBA season so far, Rondo’s near triple-double (21 points, 12 rebounds, and eight assists) led the Lakers past the Oklahoma City Thunder without LeBron James and Anthony Davis.

Unfortunately, Rondo strained his finger in the fourth quarter against the Thunder and while X-rays returned negative, an MRI later revealed a fracture.

While Rondo did not play against the Cleveland Cavaliers, he reportedly is expected to be out 4-5 days, according to Dave McMenamin of ESPN: