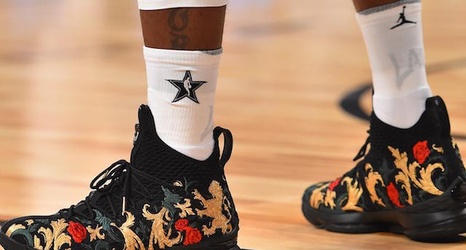 Debut by LeBron James on the Staples Center court during the 2018 NBA All-Star Game, the Kith x Nike LeBron Performance 15 “Closing Ceremony” is due to release Friday, Aug. 31, exclusively at Kith L.A.

The retailer is selling the shoe via a drawing system, with entries accepted through the Kith app until 12 p.m. PT Thursday. Winners will be notified by 3 p.m. that afternoon. The shoe’s title is derived from the release being the last for the Nike LeBron 15.

Kith and Nike previously partnered on a James collaboration on two separate occasions. The first took the LeBron 15 and upgraded it to release in three models that featured zippers and two pairs were accompanied by removable straps that read “Long Live The King.