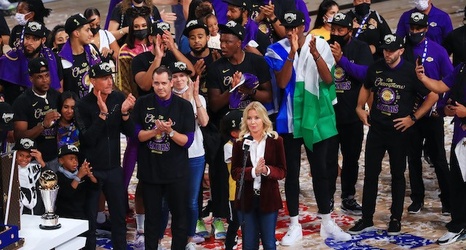 The Los Angeles Lakers once again sit atop the NBA after claiming their league-tying 17th championship. The title redeemed several players and organizational members, but it was a special one for Jeanie Buss as she became the first female governor to win an NBA title.

Her leadership throughout the 2019-20 season drew praise from the likes of head coach Frank Vogel and LeBron James, among others, and it is well-deserved for all she had to handle this past year.

It is unfortunate, though, that Buss’ first title comes in the middle of a pandemic and thus prevents the Los Angeles from properly celebrating their first title in a decade.