Arella Guirantes needs to end her rookie season on a high note for L.A.’s playoff push 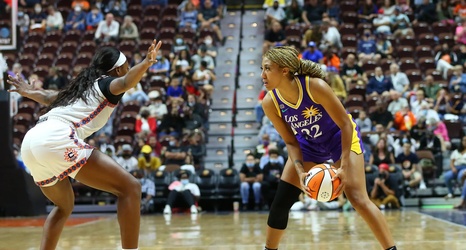 The 2021 Sparks season has been a constant carousel of players in and out of the lineup, forcing younger, unproven players into larger roles than they’d previously been used to. Whether that was Nia Coffey and Bria Holmes at the start of the season, Lauren Cox in recent weeks, or Te’a Cooper throughout, L.A. has had to turn to the back end of its roster on numerous occasions to stay afloat.

With the news that Kristi Toliver could miss the final four games of the regular season with a broken finger, another opportunity has presented itself for a young player to take advantage — this time, Arella Guirantes.