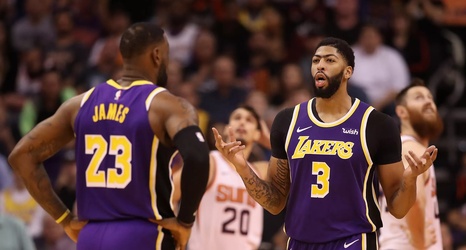 Just 10 games into the 2019-20 NBA season, the sight of Anthony Davis heading back to the locker room is becoming all-to-familiar of an image for Los Angeles Lakers fans. Davis is already wearing a compression shirt and receiving heating pads on the bench to treat what the Lakers have thus far only described as a “sore right shoulder,” and in the team’s Tuesday win against the Phoenix Suns, Davis picked up a new ding.

Shortly after he returned to the bench and allowed concerned viewers to breathe again, it was revealed that Davis had been hit in the rib, and had went back to the locker room to get it taped.