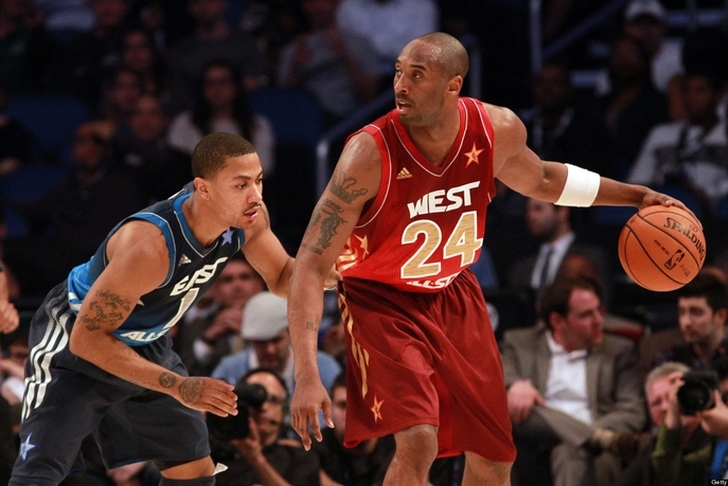 Kobe Bryant's 2016 NBA All-Star Game will be his last as an active player, capping off an All-Star career which sees him finish first all time in starts (15), points (280) and MVP awards (4). This year's All-Star festivities at the Air Canada Centre will be an extended goodbye to one of the game's greatest stars -- a showcase which may very well end with Bryant picking up his fifth MVP nod.

In celebration of Kobe's All-Star resume, we thought it'd be fun to provide highlights of his four MVP performances and rank them by sheer impressiveness.

Kobe scored 17 of his game-high 31 points in the first half, routinely stopping on a dime and draining shots in the West's runaway 153-132 win. Bryant was the star of the show in Sin City, but there were several other West players who could have taken home the honors -- including Amar'e Stoudemire (29 points, 9 rebounds) and Shawn Marion (18 points, 8 assists, 4 rebounds, 2 steals).

A fantastic night to be sure, but not on the level of the other three.

This one gets the nod at #3 based on the moment in provided Lakers fans and NBA fans in general. Bryant (27 points, 4 steals) shared MVP honors with former teammate Shaquille O'Neal (17 points), burying the hatchet in O'Neal's final All-Star Game. It was a great bit of theater and served as closure on one of the most tumultuous, but rewarding partnerships in modern NBA history.

This was supposed to be Bryant's homecoming to Philly, but what it became was a jaw-dropping heat check in front of a pro-Sixers crowd which booed him mercilessly all night long. Still stinging from the previous year's NBA Finals beatdown engineered by the Lakers, 76ers fans taunted and screamed at Kobe all night long.

Bryant's last All-Star Game MVP is undoubtedly his best. Buoyed by the Lakers faithful at Staples Center, Kobe scored 21 of his 37 points in the first half, adding 14 rebounds in the West's 148-143 triumph.

Soaking in the cheers as the night went on, Kobe was on a completely different level than anyone else on the court. Only Michael Jordan can stake claim to All-Star performances of similar potency and pure awesomeness.