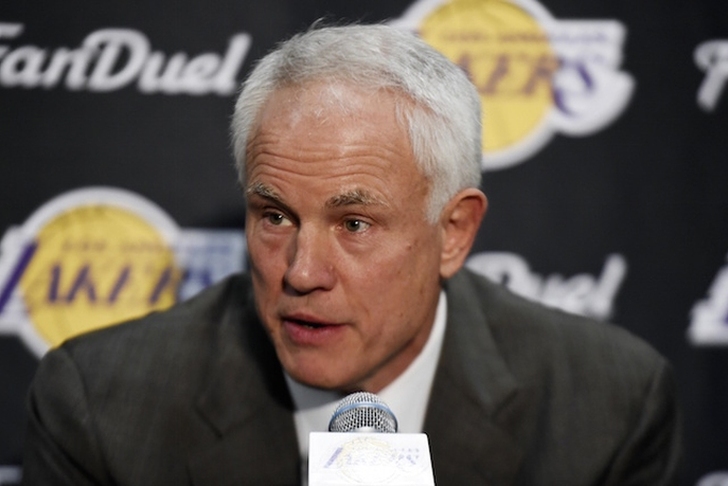 The Los Angeles Lakers have been an absolutely trainwreck this season, posting a 3-18 record that puts them on pace to set a new mark of the worst record in franchise history for the third straight year. General manager Mitch Kupchak expressed his frustration with the situation following the Lakers' loss to the Raptors on Monday night.

"Going into the season, this is not what we expected. We tried to find a mix of young players and veterans that would give our fans something that led to more victories. Clearly, three victories at this time is not what we thought we'd be. So that's frustrating and it's up to myself and Byron [Scott] to figure it out and hopefully have some improvement toward something that's more consistent, more fun to watch and less frustrating.

"I know people aren't happy but that also should be directed at me. That's the bottom line. Everybody has to share in the blame. Whether that's the GM, the coach or the players, it's got to be directed somewhere. I think our fans would understand if you're actually developing young players and there's some growth, and maybe that's yet to come. But in the first 20 games, it's tough to find consistent results to feel good about."

To make matters worse for Los Angeles, head coach Byron benched their past two top-10 draft picks, Julius Randle and D'Angelo Russell, prior to the game in Toronto, taking them out of the starting lineup.

Star guard Kobe Bryant also announced that he would retire following this season after 20 seasons with the team, which has turned this year into a farewell tour around the NBA for him - even though he's putting up one of the worst statistical seasons of his career. However, Kupchak said his season needs to be about more than that.

"I think our fans understand, this being Kobe's last year, after 19 just ridiculous years, that we're in a year that there's going to be a salute and a goodbye, which in itself is exciting. But we've got to give them more than that. Quite frankly, I have to get more answers on our players going forward on this [young] corps. I want to see them develop and not only just get through the season averaging X-number of minutes and then next year we just figure it out. We need answers this year."

The Lakers play their next game on Wednesday night against the Timberwolves in Minnesota.