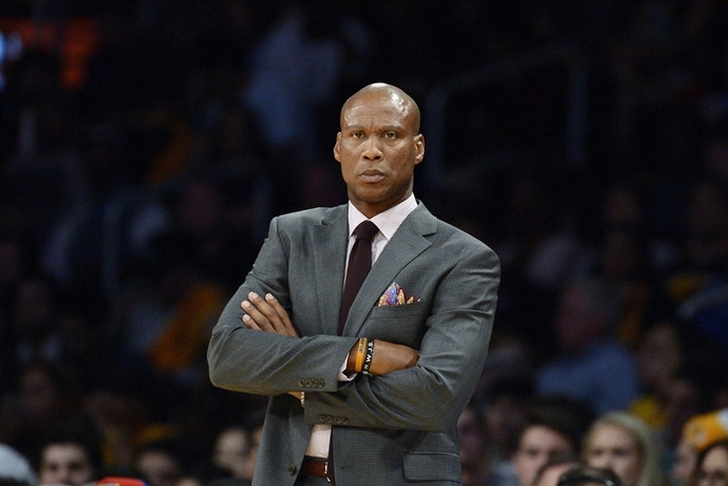 Los Angeles Lakers head coach Byron Scott has received much of the blame for the team's lackluster 3-19 start to the season, but his job may not be in jeopardy. According to Mark Medina of the Los Angeles Daily News, the Lakers are unlikely to fire Scott this season:

Byron Scott still has enough support from Lakers general manager Mitch Kupchak and vice president of player personnel Jim Buss that he is expected to coach through the rest of the 2015-16 season, according to team sources familiar with the situation. With Scott signing a four-year, $17 million deal last summer, the Lakers plan to evaluate his future once the 2015-16 season ends, according to a team source.

The Lakers are not happy with the persistent losing, obviously. But Kupchak and Buss sympathize with Scott on handling what one team source called "a no-win situation."

Scott has specifically received a great deal of criticism for the way he's handled the minutes of young players Julius Randle and D'Angelo Russell, along with how many minutes Kobe Bryant has been getting. However, Medina reports that Scott has reign to do whatever he wants:

The Lakers have granted Scott the autonomy to coach his team without interference. But Kupchak and/or Buss will likely meet with Scott next week after the team's eight-game trip to gain a better understanding of his thought process on how he will develop the team's young players, according to a team source familiar with the situation.

In saying this, it's hard to imagine that Scott will be back with the Lakers next season. Los Angeles wasn't expected to be a playoff team this year, which is why Scott is in a "no-win" situation, but they've been absolutely disastrous this year - and the blame for that rests with Scott.