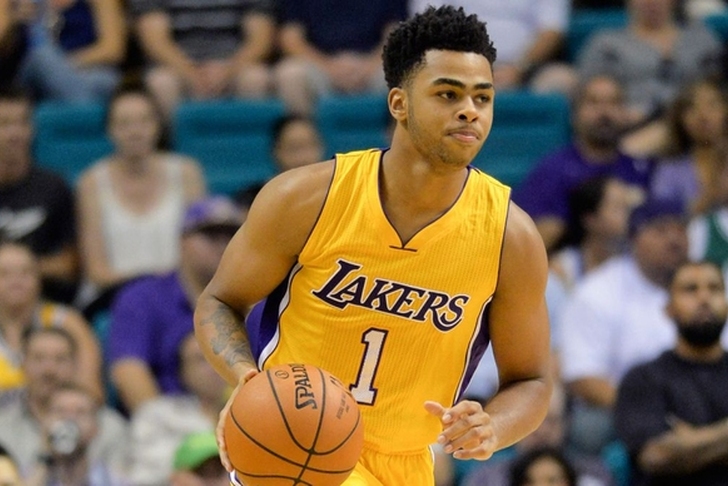 The NBA Finals are underway, but the Los Angeles Lakers are focused on the offseason. The draft is less than a week away and the Lakers are also preparing the start of free agency on July 1. With the No. 2 overall pick and plenty of cap space, it's not a surprise there are plenty of rumblings around the Lakers. Here are all the latest Lakers rumors and news you need to know.

Could Lakers Trade D'Angelo Russell?
The Lakers have show interest in top 10 prospects not named Brandon Ingram or Ben Simmons, and that's led to rumors they could make a trade back into the Top 5 or 10. One way the Lakers could try to do that is to trade D'Angelo Russell, reports Chad Ford of ESPN Insider.

"I think we all assume that Ingram's going to be the guy at No. 2, but they've brought in Marquese Chriss, they've taken a long look at him," Ford said on SportsCenter. "They've brought in Dragan Bender, Jaylen Brown, and while I still believe that it will be Ingram at No. 2, the Lakers have explored other options. And again I think the concern with Ingram is his lack of strength and how NBA-ready he's going to be because of that. I think more likely the Lakers are trying to pick up another pick in this draft in the top five and the guy that they have that they can shop is D'Angelo Russell, a guy who was their No. 2 pick in the draft last year but burned some bridges in the locker room."

Even with Russell's issues with filming his teammates, it seems unlikely he'll be traded. He was the No. 2 overall pick just one year ago and that was in a better draft class than this year's. While the Lakers could want another top 5 pick, it'd be a surprise to see them trade Russell to get it.

Buddy Hield expressed confidence that Lakers will select him at No. 2

This was Buddy Hield's second workout with the Lakers and says its also the only individual workout he's had. It's also his last.

While Hield would upgrade the Lakers' shooting, it still looks like Ingram will be the pick.

Lakers Want Ingram Over Simmons?
The 76ers are expected to pick Ben Simmons No. 1 overall, and that's just fine with the Lakers. According to Jonathan Givony, they would have taken Ingram No. 1 overall if they had the pick. That's because Ingram "is a perfect fit for their roster and should generate a great deal of excitement about their future." At this point, anything other than Simmons-Ingram to start the draft would be a major stunner.

Follow our Los Angeles Lakers teams page for all the latest Lakers rumors or download the Chat Sports App!