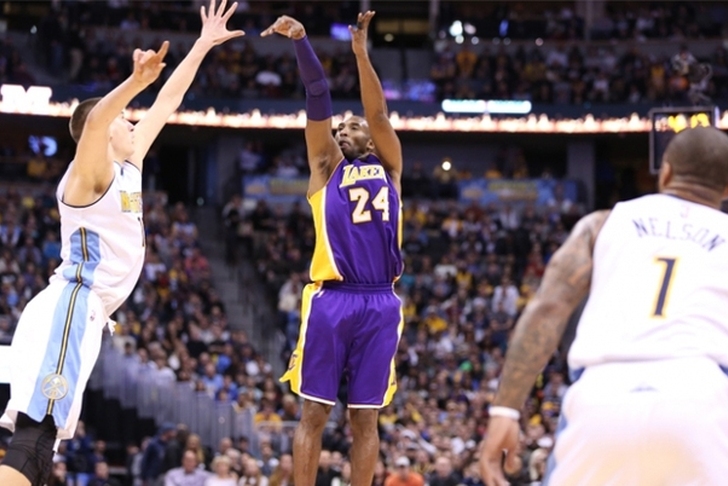 The Los Angeles Lakers (5-24) continue to search for answers after an awful start to the 2015-16 NBA season, with some key upcoming games standing as potential turning points for the team on it's road to respectability. Here's our Lakers Weekly for your holiday reading pleasure.

The Week In Review:

The Lakers are in the midst of their best stretch of the 2015-16 season. That's not saying much considering how disappointing things have been, but a 2-2 record over the team's last four is at least an incremental sign of progress.

Los Angeles followed up a convincing 113-95 over the Warriors-conquering Milwaukee Bucks last Tuesday with back-to-back blowout losses to the Houston Rockets (107-87) and Oklahoma City Thunder (118-78). Los Angeles' offense was stagnant in both games, especially against the Thunder where they shot less than 35% from the field with Kobe Bryant sidelined by a sore shoulder.

Bryant came back in a big way in Tuesday's road game against the Denver Nuggets, dropping 31 in a throwback performance during the team's 111-107 win. Maintaining a hot shooting stretch over the past half-dozen games or so, Bryant made 10-of-22 overall from the field and cashed in 9-of-11 from the charity stripe. The Lakers look to put together their first "winning streak" of the season with a home win over the Oklahoma City Thunder (19-9) on Wednesday. It's the second game of a back-to-back, so keep an eye on the Lakers' energy level (and Kobe Bryant's minute count) as they look to exact revenge for last week's blowout.

It doesn't get much easier on Christmas Day when the Lakers "host" the Los Angeles Clippers (16-13) in the nightcap of the league's annual holiday showcase. The Lakers will embark on a three-game road trip after the XMas showdown, making stops in Charlotte (Monday), Boston (Wednesday) and Philadelphia (Friday) -- three winnable games if the team can get their shooting and defensive assignments in order.

Julius Randle tweaked his ankle in Tuesday's win over the Denver Nuggets, but the injury is not thought to be serious.

Kobe Bryant is still dealing with a shoulder problem, but he looked pretty comfortable on the court during Tuesday's victory.

What They're Saying About The Lakers

Lakers-Nuggets aftermath, checking in on the rookie class (Silver Screen and Roll)