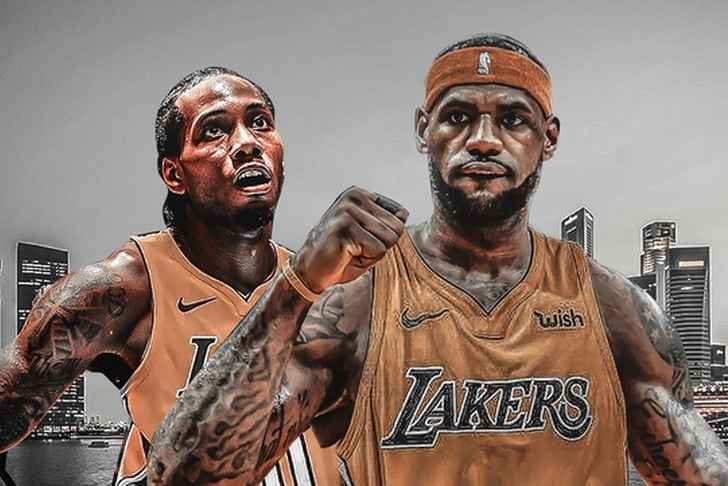 The Lakers rumors are full steam ahead now that they landed LeBron James to a 4 year $154 million deal. With James officially headed to the Los Angeles Lakers now look towards the rest of the roster and which players they could add to make a run at an NBA title this season. Los Angeles already added the likes of Lance Stephenson and JaVale McGee, so now they look towards some star players they could pick up. A common NBA rumor is Kawhi Leonard joining the King, but what are the chances of this happening? The LeBron heading to the Lakers was such big news that he may draw out a former teammate out of retirement. Here are all the latest Lakers rumors you can't miss:

Kawhi Leonard Lakers Trade Talks
The NBA trade rumors are roaring in Los Angeles and a name that is echoing through the street is Kawhi. The Lakers have been talking to the San Antonio Spurs, but those conversations haven't been going very well. If you're into sports betting, the Lakers are still sitting in second-position for Leonard's services next year.

According to The Ringer's Kevin O’Connor, the Lakers’ offers have been underwhelming, with one NBA executive describing them in an unflattering manner

With LeBron officially agreeing to sign with the Lakers, it’ll be fascinating to monitor what type of leverage the Spurs can create for Kawhi Leonard, who still desires to play for the Lakers, according to multiple league sources—all of whom say offers to the Spurs have been underwhelming. One executive said the proposed packages have gotten worse with each round of negotiations, while another said they’re flat-out unacceptable.

With James locked in for four years, and Leonard is a free agent in 2019 the desperation for the Lakers is gone. Los Angeles has the leverage now and it's why they have stated that Kyle Kuzma is off-limits in any Leonard deal.

Chris Bosh Joining The Lakers?
Chris Bosh played with LeBron in Miami and won two championships with him during that time. Bosh has not retired, instead, a joint medical review by the NBA and players union ruled Bosh out for last season, it was believed to be a career-ending illness. Bosh failed a physical exam due to blood clots and most doctors won't clear a player suffering from the illness.

On Sunday Sean Deveney of Sporting News' reported "advances in blood-thinning medication" leave him less susceptible to the blood-clotting issue that put his basketball career on hiatus.

Deveney states that the Lakers are a potential destination for Bosh from his ties with LeBron and the Lakers. Bosh's former agent Rob Pelinka is now the general manager of the Lakers. Bosh hasn't played in an NBA game since February 9th, 2016 and is currently 34 years old.

5 Players The Lakers Could Add To Play With LeBron James

With LeBron James officially in tow, the Lakers now look towards the rest of the roster and which players they could add to make a run at a title this season. They already added the likes of Lance Stephenson and JaVale McGee, so now they look towards some star players they could pick up. Kawhi Leonard is obviously included due to the spree of trade rumors that have come out around him and the Lakers. We also include 2 former Lakers in Brook Lopez and Julius Randle, who could be two cheap options to pair with LeBron.

In the video above JJ Reddick was included in the video, because it was flimed before he re-signed with the 76ers.