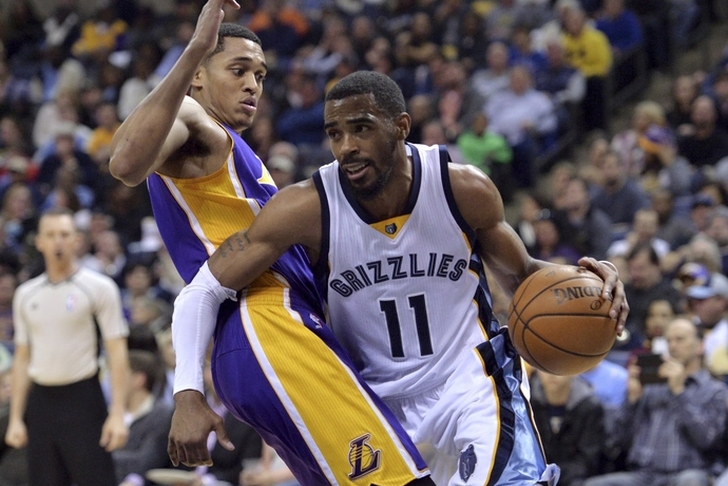 Los Angeles targeting Conley?
The Lakers appear to have their point guard situation locked up with D'Angelo Russell and Jordan Clarkson, but that hasn't stopped them from going after Mike Conley, according to ESPN Chris Broussard:

Conley is widely considered to be the top point guard available on the open market, but the Grizzlies and Mavs are widely thought of as the only two teams he is seriously considering.

LA's interest may have to do with the unsure status of Clarkson, who is a restricted free agent and is expected to receive a max offer (or close to it) from the 76ers. The Lakers will be able to match any offer Clarkson receives.

Lakers interested in Batum
Nicolas Batum is quickly becoming one of the most desired free agents as a relatively affordable wing player, and he is strongly considering meeting with the Lakers, according to Brad Turner of the Los Angeles Times:

The Wizards, Warriors, Grizzlies and Hornets are also very interested in Batum, who averaged 14.9 points, 6.1 rebounds and 5.8 assists per game for Charlotte last season.

Parsons another target?
Another wing target that has peaked the Lakers' interest in recent days has been Chandler Parsons, according to ESPN's Tim MacMahon:

League sources: Lakers are among suitors for Chandler Parsons. ESPN's Marc Stein reported that the Grizzlies are also pursuing Parsons.

Parsons is seeking a max contract, and since Dallas has said they won't give him that offer, he is expected to play somewhere else next season. Memphis plans to offer Parsons that max in an effort to please Mike Conley - who they are trying to re-sign - but the Lakers have a chance to steal him away by offering the max as well.

Lakers name top five targets
Despite losing out on Durant, the Lakers aren't short on targets. Broussard also reports that LA has identified five other players they will pursue:

Los Angeles has the most cap space in the league, giving them enough cap space to sign two max players. Whiteside will undoubtedly get one of those first max offers, as will Horford. Barnes may also receive a max offer from the Lakers, as he is a restricted free agent and the Warriors likely wouldn't match an offer of that magnitude.