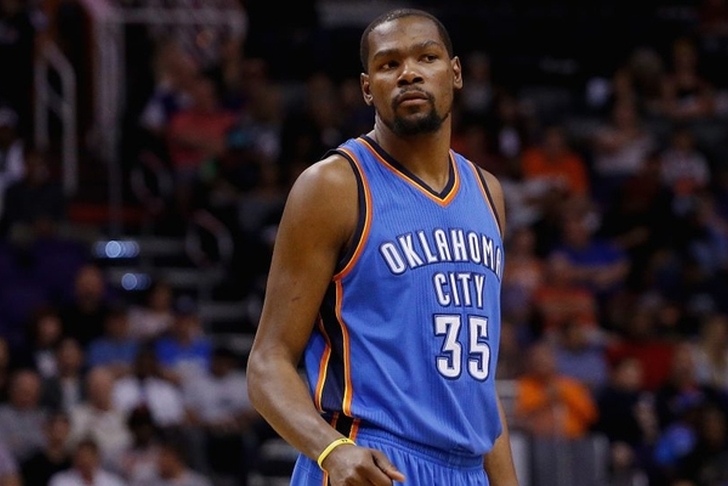 Lakers won't get meeting with Durant
Yesterday, the Lakers said they were doing everything they could to land a meeting with Durant after not being one of the first six teams he granted meetings to, but their efforts seem futile. According to ESPN's Chris Broussard, KD definitely will not meet with LA:

Despite their hopes, Lakers will not get a meeting with KD, sources say.

Durant has scheduled meetings with the Thunder, Warriors, Spurs, Celtics, Clippers and Heat.

Los Angeles has five other targets
Despite losing out on Durant, the Lakers aren't short on targets. Broussard also reports that LA has identified five other players they will pursue:

Los Angeles has the most cap space in the league, giving them enough cap space to sign two max players. Whiteside will undoubtedly get one of those first max offers, as will Horford. Barnes may also receive a max offer from the Lakers, as he is a restricted free agent and the Warriors likely wouldn't match an offer of that magnitude.

Lakers losing Jordan Clarkson to Sixers?
Clarkson is a restricted free agent this summer, meaning the Lakers will have a chance to match any offer he receives on the open market. However, they're devoting most of their cap space to the pursuits of the free agents named above, which means they could let Clarkson walk if he receives an offer they don't have the cap space to match.

According to Fansided's Bret Stuter, Philadelphia is expected to make a run at Clarkson this offseason - potentially offering him a max contract - and some are even predicting he'll sign with Philly:

As it stands, Clarkson is the ideal guard prospect for the Philadelphia 76ers own needs.  He is a two year veteran, has averaged minutes per game, can play off the ball or running the offense, can score – he put up 15.5 points per game in the 2015-2016 season, has a nice free throw shot at 81.5 percent accuracy, and he can sink a trey.

The fit is so sound, that even ESPN has talked about it.

So if it happens, the Philadelphia 76ers sign Clarkson, they have a veteran guard who can immediately set up as the point guard alongside Ben Simmons and play off the ball.  And alternatively, he can take minutes running the offense.

But if the Sixers make a huge offer which the Los Angeles Lakers choose to match, they commit valuable cap dollars, entrenching them as a rebuilding team for the 2016-2017 season, and adding extreme value to the first round pick in 2017 which falls to the Philadelphia 76ers if if slides to four or later.

Clarkson can play either point guard or shooting guard, and would be a big upgrade at either position for the Sixers. He averaged 15.5 points and 4.0 rebounds per game last season.