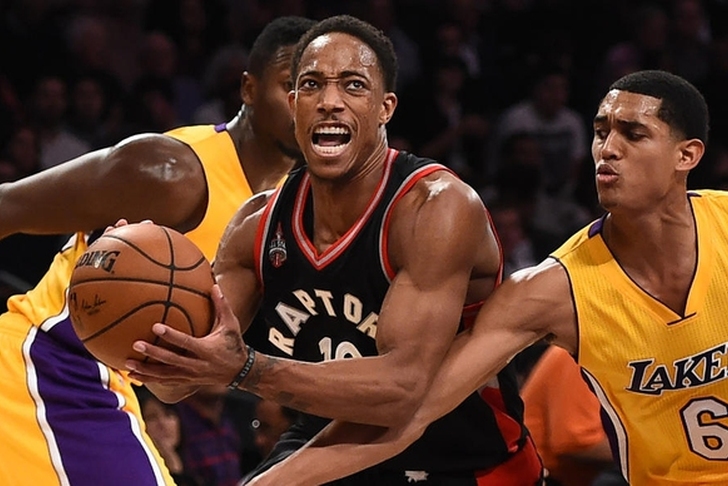 Lakers pursuing DeRozan, threat to take him from Toronto?
Los Angeles is aggressively going after both Kevin Durant and Hassan Whiteside this summer, but another player they have their eyes on is Raptors shooting guard DeMar DeRozan. According to Sam Amick of USA Today, the Lakers plan to make a strong pitch to the Compton-native about coming home:

As for DeRozan, he has plenty of options on hold as well. The Lakers, who could wind up getting a meeting with DeRozan, in part, because he still resides there during the summer, are widely known to be very interested in making him part of their young core. The Clippers, Golden State Warriors, Miami Heat, New York Knicks, and Orlando Magic are also hoping to lure him stateside.

The Lakers will offer DeRozan the max, which the Raptors may be hesitant to do as they try to re-sign both him and Bismack Biyombo. DeRozan averaged 23.5 points, 4.5 rebounds and 4.0 assists per game last season.

LA has "no shot" at Durant?
The Lakers are one of the several teams interested in Durant, but as Amick reports, they have "no shot" to land him. Durant has set up meetings with the Thunder, Warriors, Spurs, Clippers, Celtics and Heat, meaning the Lakers are virtually out of the race.

Despite years of speculation about Durant possibly signing with his hometown Washington Wizards or the Los Angeles Lakers, a person with knowledge of his situation told USA TODAY Sports that those two teams are not expected to land a meeting with the former MVP. As it stands, it’s the six aforementioned teams coming Durant’s way at a location that has not yet been determined.

Los Angeles is still working on doing what they can to get a meeting with Durant, but those chances seem slim. If not, the Lakers will focus all of their attention on signing both Whiteside and DeRozan.

Parsons a backup plan for Lakers?
If Los Angeles happens to strike out on both Durant and DeRozan, Chandler Parsons could emerge as a potential target on the open market. According to Mike Leslie of WFAA Sports, the Lakers will be one of a handful of teams that will make a pitch to Parsons.

According to a source, Dallas Mavericks forward Chandler Parsons will have a variety of options in free agency this summer, as the Mavs spend their time likely focusing on other targets first.

The Magic and Lakers both appear to have the cap room to offer Parsons the max offer he covets. It would appear that the Clippers do not. How they fit into this proposed scenario is unclear, given that reality.

Dallas has already said that they don't plan to offer Parsons a max contract this offseason, and he will look at other teams while the Mavs pursue both Mike Conley and Hassan Whiteside. They also need to re-sign Dirk Nowitzki, making Parsons a fairly low priority for them this summer.