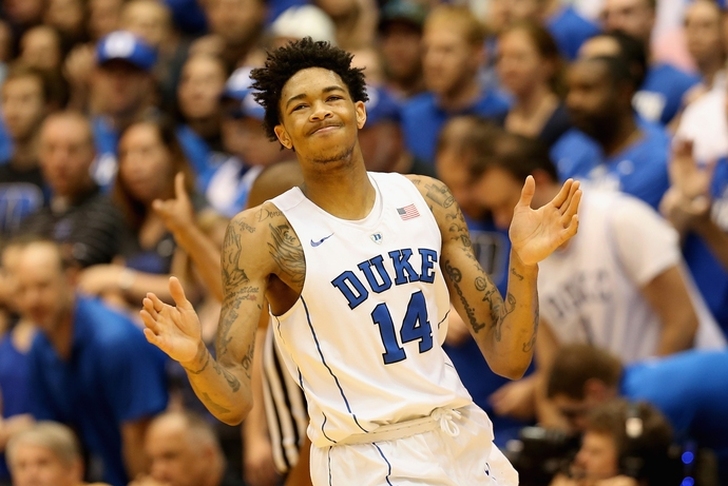 The NBA Finals are underway, but the Los Angeles Lakers are focused on the offseason. The draft is just over two weeks away and the Lakers are also preparing the start of free agency on July 1. With the No. 2 overall pick and plenty of cap space, it's not a surprise there's plenty of buzz around the Lakers. Here are all the latest Lakers rumors and news you need to know.

Lakers Out On Dragan Bender?
While Ben Simmons and Brandon Ingram are the presumptive top 2 picks (more on them below), the Lakers were at least looking at Dragan Bender. However, that's no longer the case.

Told the Los Angeles Lakers have fallen out of interest in Dragan Bender. Sounds like No. 2 pick is Brandon Ingram.

As Pick says, it's very likely Ingram will be the pick this year.

No Simmons Workout?
The 76ers are expected to take Ben Simmons No. 1 overall, and the Lakers have yet to schedule a workout with him.

Brandon Ingram (@B_Ingram13) scheduled for private workout with Lakers on Thursday, according to league sources.

In the surprise event Simmons falls to No. 2, the Lakers would likely take him regardless of any workout.

Lakers haven't scheduled a workout with Ben Simmons yet. Draft is 17 days away...

Ingram is widely expected to be the No. 2 pick this year. Unless the Lakers pull a stunning and unexpected trade, they should end up with Ingram this year.

Lakers Will Work Out Labissiere
In a bit of a surprise, the Lakers will indeed workout Skal Labissiere.

Not at IMG... He is on their schedule for a workout. He's coming to them for a visit and a workout on their terms. https://t.co/RDAbJqgPNx

The Kentucky big man struggled in his only season with the Wildcats, but he still has great potential. Labissiere is a likely mid-lottery pick, meaning there's likely no chance he falls to the Lakers' second round pick. But couple Labissiere with the Lakers' decision to workout Henry Ellenson, and it sounds like the Lakers are at least considering moving back up into the first round. Or perhaps their just doing their due diligence.