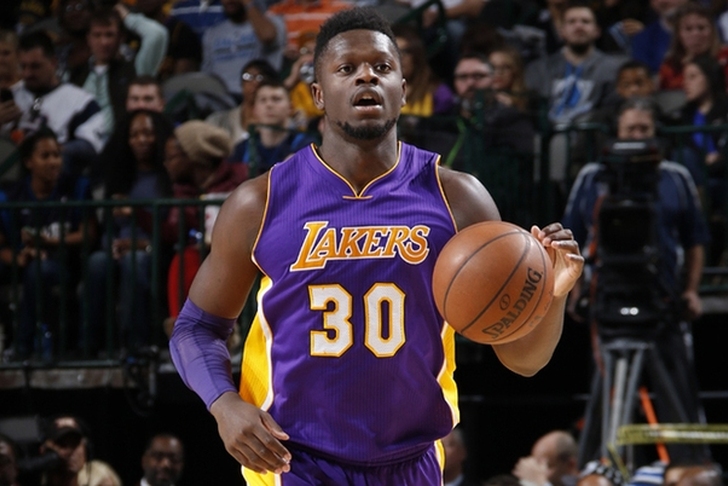 The Los Angeles Lakers put D'Angelo Russell on the trade block after they landed the No. 2 pick in the draft (as they plan to pick UCLA's Lonzo Ball with the selection), but he's not the only young player they're open to trading.

According to Bleacher Report's Chris Roling, the Lakers are open to dealing Julius Randle as well.

It's hard to imagine the Lakers deal a budding core piece like Russell or Randle now after sticking to the rebuilding plan for so long. Unless an offer for a guy like Paul George comes around, the Lakers will want to stick with their young core and try to move bad contracts. Other rebuilding teams won't mind taking a pick while inhaling the contract on a guy like Mozgov.

The only realistic trade that could entice the Lakers to send away Russell or Randle is George, but the Indiana Pacers star just missed out on all-NBA teams, meaning the Pacers can't offer him more money than another other locale. He wants to win titles and hails from California, so the Lakers should probably feel like they have a great shot at him in free agency after next season.

Ideally, the Lakers like to part with the massive contracts they signed Timofey Mozgov and Luol Deng to last offseason, and are using Russell and Randle to help entice teams.

Several teams have already created trade packages for Russell, and it won't be long before they do the same with Randle. He averaged 13.2 points and 8.6 rebounds per game on a career high 48.7 percent shooting and 16.32 PER this past season.

However, it's going to take a serious trade package for the Lakers to part with Randle. His versatility at the power forward position makes him a perfect fit with Lonzo Ball in an up-tempo system, and would likely only be dealt if it was in a package for Paul George.