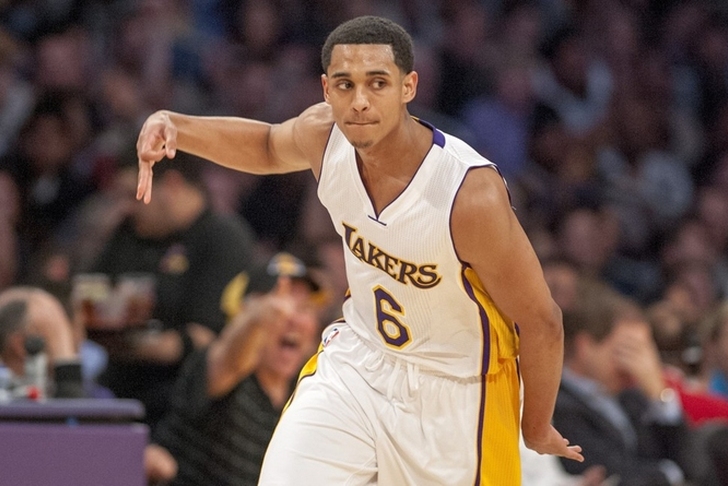 The Los Angeles Lakers are trying to maximize their cap space to make a run at two superstars next offseason and are willing to trade some of their young players to make that happen.

After signing shooting guard Kentavious Caldwell-Pope, Jordan Clarkson will likely become the player the Lakers are most looking to move, according to FanSided's Jason Reed.

Jordan Clarkson may be the next member of the Los Angeles Lakers to pack his bags. With the latest Lakers rumors spelling out that the team is looking to free up cap space to pursue a superstar in 2018, Clarkson may just be the first to go.

Clarkson currently owns the third highest contract on the Lakers behind veteran small forward Luol Deng and new addition Kentavious Caldwell-Pope. Clarkson is set to make $37.5 million over the next three years – not a huge contract but definitely a noticeable one.

Luckily for the Lakers, youth is on Clarkson’s side. The 25-year-old guard is entering just his fourth year in the league. With consistent numbers in all three years, teams know exactly what they will be getting out of a Clarkson deal.

Yes, he is expensive, but he is also expendable. Especially with Caldwell-Pope now in the fray the Lakers have even more incentive to deal Clarkson. There no longer would be a void to fill as Lonzo Ball and Caldwell-Pope is the starting backcourt in Los Angeles.

Even though Caldwell-Pope is only signed to a one-year deal, the Lakers plan to sign him to a longer deal next summer.

Los Angeles is trying to sign a backup point guard in free agency, and with rookie Josh Hart expected to be in the rotation, Clarkson's role will likely shrink again. He started a career-low 19 games this season.