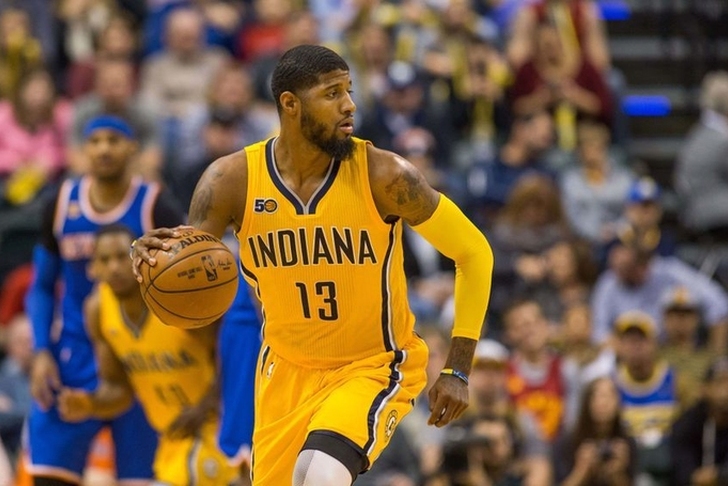 Paul George has been adamant about the fact that he plans to sign with the Los Angeles Lakers as a free agent next offseason, and though the Indiana Pacers are trying to trade him, he has told other teams that he would only be a "one-year rental" for them.

However, it appears another team has firmly entered the fix to sign George long-term.

According to ESPN's Stephen A. Smith, George would re-sign with the Cleveland Cavaliers as long as LeBron James was there.

“He’s obviously indicated he doesn’t want to stay with the Pacers, which has put them in a bind,” Smith said on SportsCenter. “He can’t stay there; they’ve got to make a move this summer because they can’t open the season with him. So they’re looking to move him. According to numerous reports, he’s told the Los Angeles Lakers that he wants to be there. He intends and practically guaranteed them that he’s coming by summer 2018. But from what I heard as recently as a couple of days ago, is that he’s letting word leak to the Cleveland Cavaliers that if LeBron indeed elects to stay in Cleveland, then Paul George won’t depart Cleveland as long as LeBron is still there if they pull off a trade to acquire him.”

“Now it appears to be the Cavaliers or the Los Angeles Clippers. You hear stuff about the San Antonio Spurs and things of that nature, which he wouldn’t mind, but that would be a one-year rental. Whereas with the Cleveland Cavaliers it appears it would be more than that if LeBron James stayed. But his ideal landing spot would be the Los Angeles Lakers, despite the fact that they’re not contenders right now.”

LeBron can also be a free agent next offseason and has indicated that he will test the open market.

The Cavs, who are already well into the luxury tax threshold, are trying to engineer a three-team trade to acquire George. Any deal would likely involve Cleveland getting rid of Kevin Love.

Los Angeles has talked with the Pacers about acquiring George via trade rather than waiting for free agency, and they may still choose to do so if they think there's a chance they'll lose him.