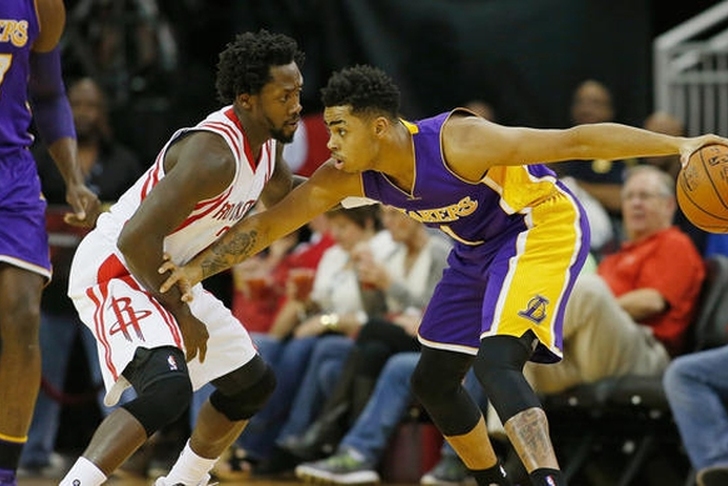 Los Angeles Lakers rookie D'Angelo Russell was back in the starting lineup for the past two games after being benched by head coach Byron Scott two weeks ago. However, with Jordan Clarkson returning from a sprained right ankle, Scott is moving Russell back to the bench.

"I don't know if it'll bother him [Russell] or not, but he's 19 years old, so it probably will," Scott said with a laugh. "But I'm going to tell him, 'Listen, the last couple of games you played really well and even the game before that you played really well when that starting lineup was Jordan and Lou.' But then Jordan got hurt so obviously he gets a lot more time. It hasn't changed. I'm still going to go back to the [previous] starting lineup . . . and see how he reacts. And I hope that he'll come out and play the same way he's been playing."

Russell averaged 18 points, five assists, three rebounds, and 2.5 steals in the past two games against the Spurs and Rockets.

Scott benched Russell and Julius Randle four games ago in favor of Lou Williams and Larry Nance Jr., hoping to light a spark under Los Angeles' past two top-ten picks. Scott said he's been much happier with Russell since he made the move:

"I thought D'Angelo started coming of age a little bit. I thought he played with a lot more confidence. His command of the offense was much better. His turnovers were a little bit lower. It's something that he's still got to continue to work on. But I like what I saw on this road trip. So again, I think his development is coming, slowly but surely. That's something that I thought was very positive."

Russell is averaging 12 points, 4.3 rebounds, and 3.2 assists per game so far this year.