Everything You Need To Know About The Nick Young, D'Angelo Russell, Iggy Azalea Saga That Is Tearing The Lakers Apart 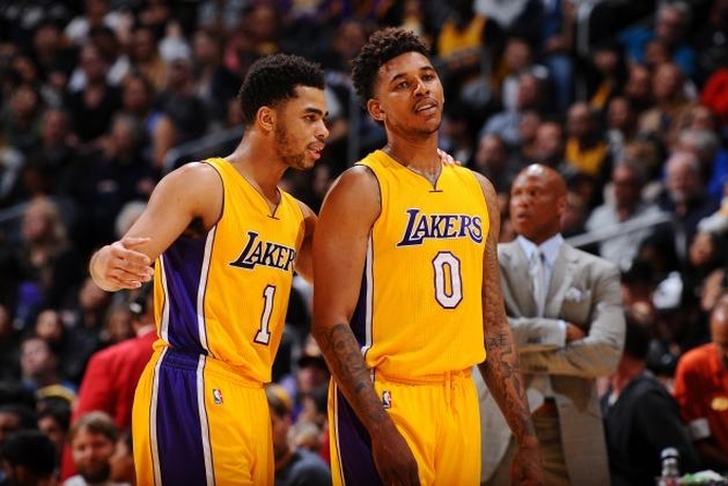 Los Angeles Lakers point guard D'Angelo Russell is being isolated by his teammates after a video leaked of him secretly filming Nick Young talking about being with other women, according to multiple reports. Young is currently engaged to rapper Iggy Azalea, but the relationship is now reportedly on the rocks.

According to ESPN's Baxter Holmes and Marc Stein, the video has become a major point of contention in the Lakers locker room, and is among the factors that contributed to their 48-point loss to the Utah Jazz on Monday night.

The emergence of the video, sources said, has been the talk of the locker room for the past several days and has led to a tangible strain between Russell and some teammates.

At a recent breakfast meeting, one source said, no Laker would sit with Russell at his table. The source added that, in another instance, Russell came into the locker room and sat next to guard Lou Williams, who got up and walked away.

"It's bad," one team source told ESPN.com's Ramona Shelburne. "It's about as bad as it can get. There were trust issues already. Now there's no trust."

Lakers officials have said they are aware of the situation and are very unhappy with Russell, but they haven't intervened.

One person who appears to be happy with the video, however, is Iggy Azalea herself. She tweeted a thank you to Russell for bringing this to light.

hmmm i see D Angelo Russell is trending... I actually liked his film. Thanks bro.

Russell, who is averaging 13.1 points, 3.4 assists and 3.4 rebounds per game in his rookie season, has had his maturity questioned by head coach Byron Scott.

Young is averaging 7.3 points and 1.8 rebounds per game this season. He is listed as questionable for Wednesday's game against the Miami Heat with an illness.