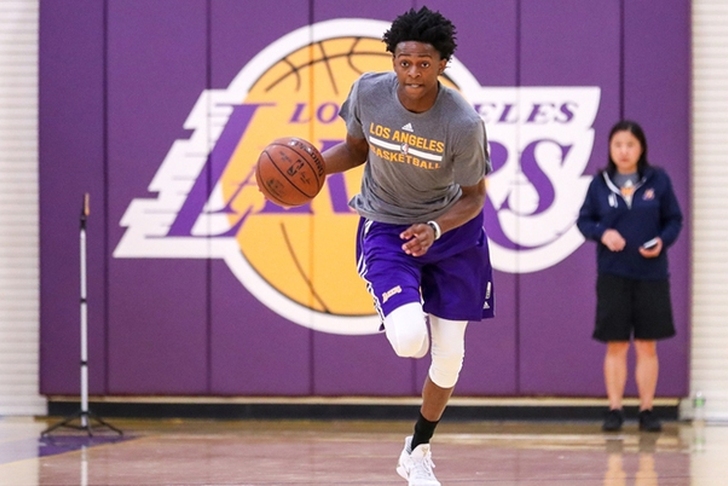 The Los Angeles Lakers had also been heavily considering Kentucky's De'Aaron Fox with the No. 2 pick - with reports that he was even the favorite at one point - but he appears to be out of the running at this time.

Los Angeles hosted Kansas small forward Josh Jackson on Tuesday for a second pre-draft workout with the team, and the team is now split on him or UCLA's Lonzo Ball, according to Broderick Turner of the Los Angeles Times.

But according to several NBA officials who were not authorized to speak publicly on the matter because no decision has been made yet, the Lakers are split over whether to use their No. 2 pick in the NBA draft on Ball or Jackson.

The Lakers, the officials said, have been having a healthy debate on which course to take because they are intrigued by the talents of both players.

Those are now the only two players the Lakers are considering. With Los Angeles now out of the running for Fox, he could go as high as No. 3 or as low as No. 5 with the Sacramento Kings being his most likely landing spot.

For Los Angeles, there's no doubt that Jackson has impressed them - and many other teams - in his workouts and interviews, but it will be a shock if they take him over Ball. LA has been going out of their way to do their due diligence and give the illusion that they aren't set on drafting Ball, but I'm hearing they still plan to take him.

Check out our Los Angeles Lakers team page for all the latest Lakers Draft Rumorsor download the Chat Sports App!