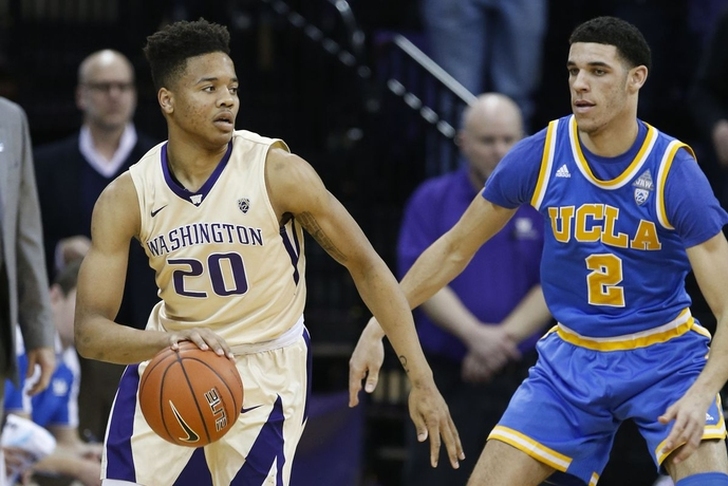 As the NBA Draft Lottery approaches next Tuesday, the Los Angeles Lakers are preparing as if they will keep their top-three pick.

And, while the consensus has been that they would like to take UCLA's Lonzo Ball, Bleacher Report's Kevin Ding is reporting that Ball is simply one of four targets for the Lakers:

Either the Lakers will start locking in on UCLA point guard Lonzo Ball, Washington point guard Markelle Fultz, Kansas forward Josh Jackson and under-the-radar Kentucky point guard De'Aaron Fox—the four players they are most considering in the top three, according to league sources…or they won't.

As uninspiring as it is to ascribe our successes of failures in life success or failures to pure luck, it's impossible to ignore the element of randomness as Pelinka, Johnson and Walton attend their first NBA Draft Combine together this week in Chicago. The Lakers' eagerness to get to know Fultz and Fox, who are scheduled to be there, while Ball and Jackson are passing it up, will be moot if the club doesn't keep its pick.

And right now, their best-case scenario is landing one of the aforementioned college freshmen—with no qualms if they can't move up to No. 1 or No. 2 overall.

This draft class is especially strong at point guard, and the fact that the Lakers are targeting three of them indicates they do not think D'Angelo Russell is the answer at the position.

There is also the question of if they'll even be able to get Markelle Fultz or Lonzo Ball. Fultz is currently expected to be the No. 1 overall pick no matter who wins the lottery, though Ball is the biggest challenger to that.