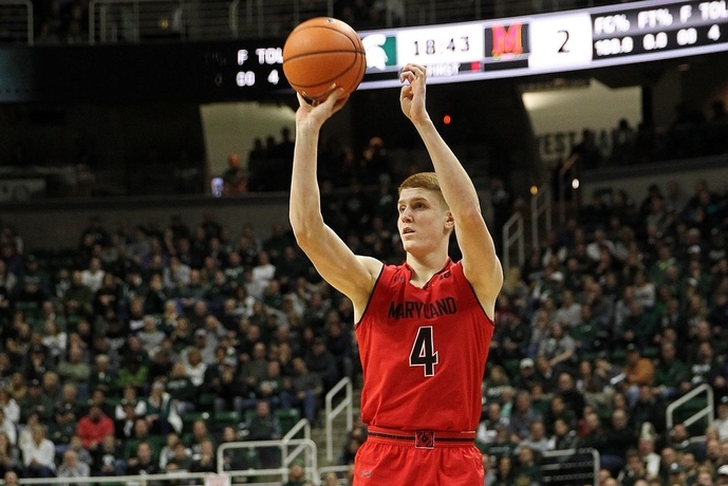 The Los Angeles Lakers hold the No. 25 overall pick in the first round of upcoming NBA Draft, and while the team is still evaluating their options, it appears they already have their top targeting in mind.

Though there were rumors last month that they promised to take former five-star center Mitchell Robinson with the No. 25 overall pick, Jeremy Woo of The Crossover reports that there's a "growing belief" LA's promise was actually to Maryland guard Kevin Huerter.

There’s a growing belief around the league that the Lakers are the team that promised Kevin Huerter at No. 25.

Huerter chose to stay in the draft after a great combine in which he showed off his excellent catch-and-shoot ability, knocking down some contested three-pointers, along with a high basketball IQ that helps his underrated playmaking ability.

Los Angeles does need more shooting after ranking 29th in the league in three-point percentage (34.5 percent) last season. Huerter shot 41.7 percent from deep during his sophomore campaign and averaged over two made threes per game during his career with the Terps.

If the Lakers do get him at No. 25, they could be getting a steal. Many projected Huerter to be a lottery pick in the 2019 draft. It appears that his athletic testing (38-inch vertical, third-fastest shuttle time) is what ultimately sold Los Angeles (and other teams) on his NBA potential right now.

However, Huerter had surgery to repair ligament damage in his right hand this week and will be out for two months. He averaged 14.8 points, 5.0 rebounds, and 3.4 assists per game last season.