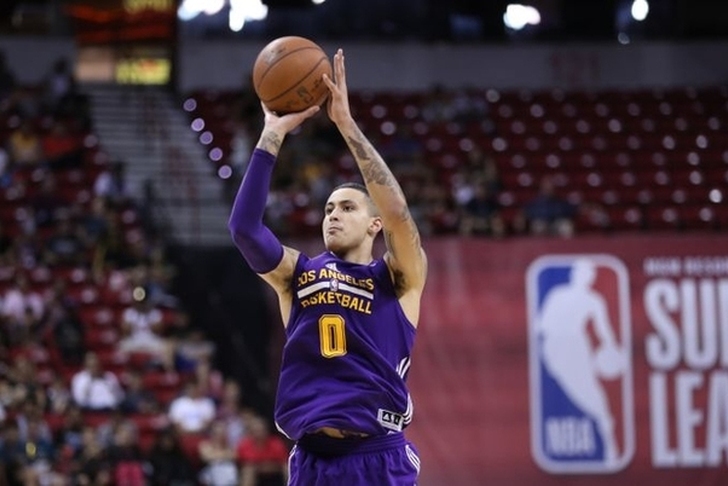 The Los Angeles Lakers were without Lonzo Ball (calf injury) in the Vegas Summer League Championship Game against the Portland Trail Blazers, but rookie Kyle Kuzma (30 points, 10 rebounds) picked up the slack to lead the Lakers to a 110-98 win.

Kuzma was red-hot from behind the arc, draining six three-pointers - including three in the first quarter - to spearhead LA's attack. The Lakers combined to shoot 14/24 (53.8 percent) from distance as a team.

Kyle Kuzma led all scorers with 11 points in the 1st quarter of the #NBASummer League final thanks to some hot shooting! #LakeShow pic.twitter.com/io6PzpLAqq

Despite Kuzma's shooting, the Blazers held a 59-58 advantage at halftime thanks to the strong play of Caleb Swanigan.

The game continued to be close throughout, but Los Angeles was able to break away late. A 13-0 run by the Lakers stretched from late in the third quarter to early in the fourth, finally creating some separation between the two sides. And, no surprise, Kuzma was also at the center of that run.

Undrafted rookie Matt Thomas showcased his touch from long range for the second straight game for the Lakers, dropping in 23 points while making all five of his three-point attempts (8/9 shooting overall). Vander Blue also scored 20 points to go along with six assists and five rebounds.

Swanigan nearly finished with a triple-double with 25 points, 12 rebounds and seven assists. All five of Portland's starters finished in double figures, but the bench combined for only 11 points (No. 10 overall pick Zach Collins did not play).