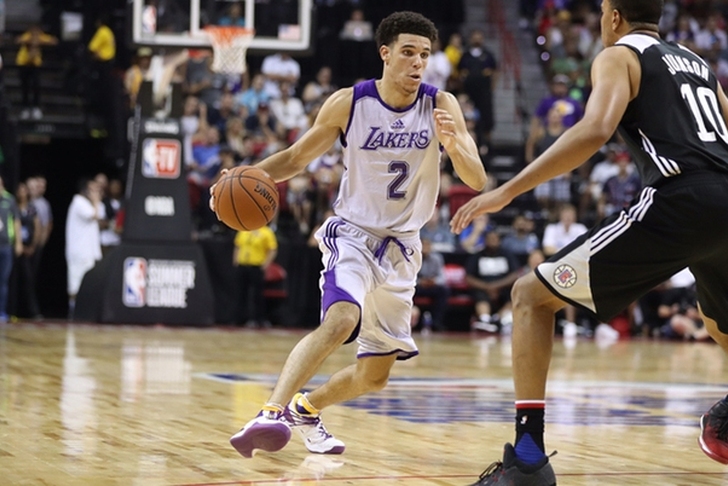 The Los Angeles Lakers are expected to have a breakthrough season with the addition of No. 2 pick Lonzo Ball and a promising young core around him. While this team isn't necessarily expected to make the playoffs, they will be one of the most entertaining and intriguing teams to watch this season. With the league releasing the full schedule on Monday night, here are the top 10 games they will play this year:

10) Los Angeles Lakers at Dallas Mavericks - Jan. 13th, 11:00 am PT
The major draw behind this matchup is Ball going up against Dennis Smith Jr., another Rookie of the Year favorite. It's the first time they will play this season.

9) Los Angeles Lakers at Sacramento Kings - Nov. 22nd, 7:30 pm PT
Another Lonzo Ball-centered rivalry, this is between him and De'Aaron Fox, who played each other twice at UCLA and Kentucky and had words for each other each time.

8) San Antonio Spurs at Los Angeles Lakers - Jan. 11, 7:30 pm PT
This TNT nationally televised game is the first matchup between these two teams this season. The rivalry between the franchises goes back to the late 1990's and, with the Spurs being one of the top teams in the league, it's a good measuring stick game for the Lakers.

7) Minnesota Timberwolves at Los Angeles Lakers - Dec. 25th, 7:30 pm PT
Minnesota is a trendy dark-horse pick in the West after acquiring Jimmy Butler in a trade this offseason, giving this Christmas Day game plenty of intrigue.

6) Cleveland Cavaliers at Los Angeles Lakers - Mar. 11, 6:00 pm PT
Playing the three-time defending Eastern Conference champs is reason enough to be excited about this game. However, LA's rumored pursuit of LeBron James will only add to the atmosphere. This will be his only time playing the Lakers in Los Angeles this season.

5) LA Clippers at Los Angeles Lakers - Oct. 19, 7:30 pm PT
The season opener between crosstown rivals. Not much else needs to be said.

4) Oklahoma City Thunder at Los Angeles Lakers - Jan. 3, 7:30 pm PT
While the pitch to LeBron James is important, the pitch to new Thunder forward Paul George is even more important. George got traded from the Pacers after telling them he would leave for the Lakers in free agency next summer, but is now considering signing a long-term extension in OKC. Having Lakers fans show him love - along with a good team on the court - will be step one in their recruiting pitch.

2) Los Angeles Lakers at Boston Celtics - Nov. 8th, 5:00 pm PT
This traditional rivalry has been revived in the months since the NBA Draft with the Lakers getting Ball and Celtics selecting Jayson Tatum. That is enough to get this game on this list, but it's No. 2 because of the Celtics being legitimate championship contenders.

1) Philadelphia 76ers at Los Angeles Lakers - Nov. 15th, 7:30 pm PT
The No. 1 pick in the draft (Markelle Fultz) vs. the No. 2 pick (Lonzo Ball) in a matchup between two of the most promising young teams in the NBA. This will be a must-watch game and a continuation of a personal rivalry that started in the Pac-12.