Who Should The Los Angeles Lakers Take With The #7 Pick In The 2014 NBA Draft? 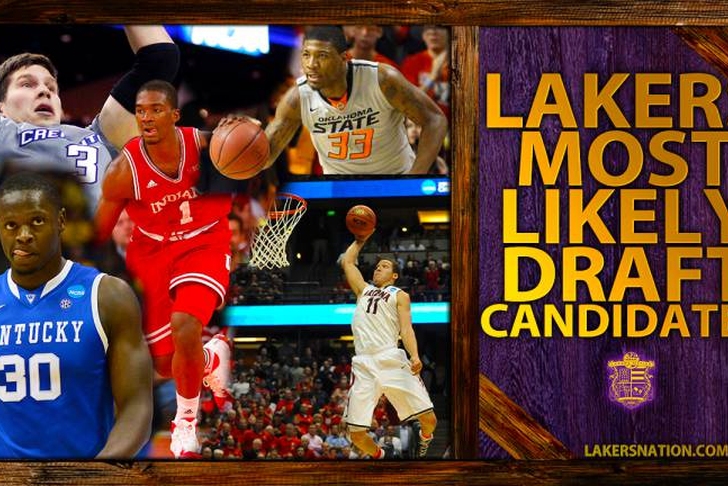 The 2014 NBA draft is just a little over two weeks away. The Lakers are looking to make a splash with their #7 pick. Since Joel Embiid, Andrew Wiggins and Jabari Parker are the presumed top 3 picks, what are the Lakers to do with their pick? Here are LA's top 5 options.

Out of everyone in this draft, Julius Randle probably has the most NBA-ready offensive skillset outside of Jabari Parker. The reason Randle is such a risky pick is his injury history - he's currently thought to require surgery on his right foot following the draft.

If there is one thing that we have learned about big time prospects who have surgery before they ever play an NBA game, it's that the prospect is not likely to have a successful NBA career. Here's looking at you Greg Oden.

Randle can be a very effective NBA player in the mold of Zach Randolph. Will he ever meet that sort of expectations? The odds are against him, but he is still a worthy pick for the Lakers.

The pure size of Noah Vonleh is enough to warrant taking a risk on him. He has a wingspan of 7' 4.25", and if you're scouting at home, yes - that's enormous. Vonleh also boasts a very good max vert of 37.0 inches.

Vonleh may not be NBA-ready yet, but his upside is huge. If the Lakers could pick him up and re-sign Pau Gasol, Gasol would be the perfect mentor for Vonleh. Don't count on him being on the board, though, as the Celtics, who pick 6th, have their eyes on this young man as well.

LaVine played just down the street from the Staples Center at UCLA, and the Lakers have been eyeing him for a while. With freakish athleticism and a solid perimeter jump shot, Lavine would be a solid choice for the Lakers here.

Two or three months ago, LaVine would have been lucky to be at the back end of the lottery. His personal workouts with teams and the NBA draft combine boosted his stock immensely. The Lakers measured his max vert at 46 inches. He is still a tad on the skinny side, but getting NBA advice from Kobe Bryant would be huge for this kid.

The Lakers are in desperate need of a point guard. Smart is probably the most NBA-ready point guard in the draft - he's big for a point at 6'3, and weighs nearly 230 pounds. His body is built for a long season like the one the NBA has to offer.

The biggest knocks on Smart have been with his character and his jump shot. The character issues were way overblown and shouldn't be concerning, but his jump shot needs to be fixed if he is to become a quality contributor for the Lakers. His quickness and power will get him points, but his jump shot will be what takes him from a good point guard to an NBA All-Star.

The Lakers would be foaming at the mouth if Dante Exum fell to them in this draft. Exum is the top point guard prospect and shouldn't fall past the #4 slot. He is tall at 6'6 and very long, measuring a 6'9 1/2" wingspan.

He, much like LaVine, lacks the major muscle to stand up to NBA defense on a nightly basis. The first thing he does when he signs with a team should be to hit the weight room.