Three Reasons The Lakers Should Not Sign Carmelo Anthony 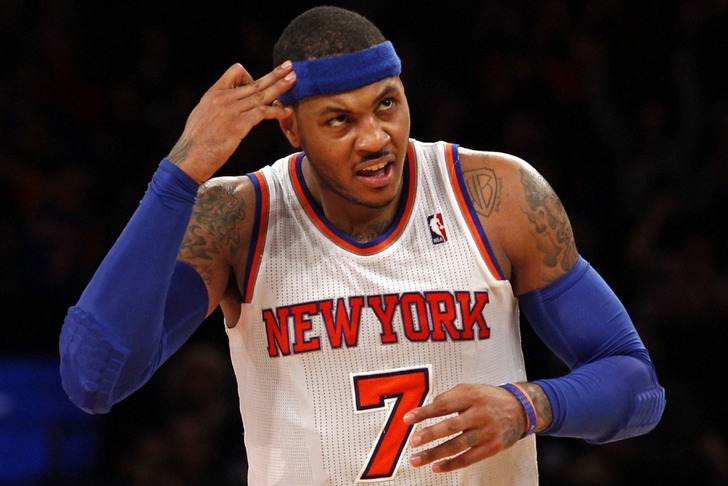 Heading into this offseason everyone knew there was a chance that Carmelo Anthony and Lebron James, two of the games biggest superstars, could opt-out of their contracts and become free agents. Once the season was over that is exactly what came to fruition and they became free agents. Since then James has been playing the game of dictator and working with his running mates in Miami to improve the roster before he signs anywhere.

Anthony on the other hand has went on a Peyton Manning-esque free-agent tour. Having already gone to visit with the Chicago Bulls, Houston Rockets, Dallas Mavericks and making his last stop in tinseltown to visit with the Los Angeles Lakers. He will then head back to New York to hear offers from his most recent team the Knicks to hear their offers and ideas for him.

With the Purple and Gold courting Mr. Anthony and showing him the bright lights of Los Angeles, I can't help but feel this is the wrong move and here's why.

Signing Anthony to a max deal (4 years, $96 million) to go along with Kobe Bryant's lucrative contract will put the team in a bit of a financial bind for the next two seasons. Anthony is already 30-years-old and although he is playing at a very high level still, there is a potential free-agent in next year's crop who loves Los Angeles and is only 25-years-old. Yes, Kevin Love.

Love will undoubtedly demand a max contract next year and if Anthony already has one then there is no chance they could bring Love in. Melo has never shown any real leadership qualities, right now the Lakers have a leader in Kobe Bryant but when he leaves in two years, then who? Carmelo Anthony? No disrespect to Mr. Anthony who is without a doubt one of the top players in the NBA but the smarter decision for the Lakers would be waiting one more year and going after the younger Kevin Love.

2. Will he and his ego get along with the new coach? Whoever that may be.

Sure, every superstar in this league has a little bit of a diva attitude and most of them tend to not get along with their coaches at one point or another. Melo made it blatantly clear when he and Mike D'Antoni were not getting along in New York, which led to a mid-season resignation by D'Antoni.

Right now the frontrunner for the job is Byron Scott, so if Scott and Melo don't get along -- what happens then? Yes, when Kobe is upset he lets it show but in a different way. When Anthony is upset it effects his game, you can see it on his face and he seems to more or less give up.

1. Kobe and Melo may be friends now, but they won't be at the end of the season.

The always important question when it comes to the Lakers; How will Kobe react to it? In the beginning it will be a great pairing for Melo and Kobe who have had a strong friendship over the last several years, then the games will begin. Kobe has a different intensity about him that almost no other player in the NBA has.

There is no giving up with Kobe, something that Melo has done. There is no joking around when the game is on, something else that Melo has done. They got along just fine when playing for team USA but so did Kobe and Dwight Howard. It's easy to come together as one when you are playing for an entire country with some of the world's greatest players.

This has all the looks of ruining a friendship and having lack of chemistry on the court as these two may not be able to coexist.

Disclaimer: Don't get me wrong the starting lineup of Steve Nash or Kendall Marshall with Kobe Bryant, Carmelo Anthony, Julius Randle and Pau Gasol is a very intriguing one and will bring plenty of excitement to the Lakers next season.

Also, if Mitch Kupchak has somehow worked out a deal where landing Anthony will lead to landing Lebron James as well, sign me up!

Follow our Lakers page for all of your latest Lakers coverage!