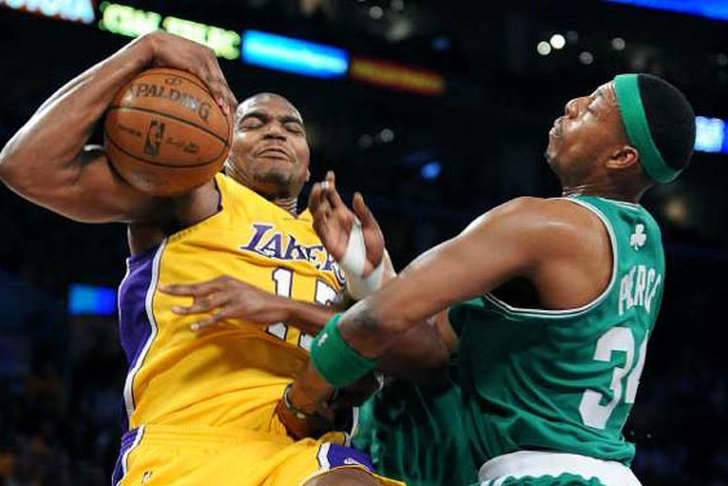 Prior to the Lakers February 9th game against the Boston Celtics, I pondered whether or not the Lakers-Celtics rivalry was the greatest in sports. In the article, I made the point that "The greatest rivalries are when every game – preseason, regular, or playoff game – SERIOUSLY matters."

And because each game between these two teams always matters, it's hard not to treat games like the one happening later on today as just another regular season game. We already know how past players feel about the rivalry, but current players usually stick to generic terms and phrases when talking about other teams. Players always want to win, but respect the other team and the history between the two teams. Maybe the rhetoric heightens during a playoff series, but players rarely treat a regular season game differently than any other.

Even Matt Barnes, noted loose cannon and somewhat of the current Lakers enforcer, wouldn't stoke the fire: "Go at their heads?" Barnes said, chuckling. "Andrew's a character. He's playing well right now, and he's got an amazing swag. You just got to let him be him. That just means we're ready to play."

Andrew Bynum has often been criticized for immaturity and poor decision making, but as a fan, it's great to know that your team actually cares. It's one of the main reasons why many love Kobe Bryant, because it's always apparent that he wants to win. As fans, it's all that we can really hope for. Players on the team you love, having the desire to play hard and win each and every game, and legitimately hating the team that you hate as well.

Bynum's comments may fire up the Celtics, being used as "locker room bulletin board material", but that's OK. If anything, it ensures that both teams play inspired an passionately on Sunday, giving us fans a great game to watch.

As if you needed any other motivation to be pumped for today's game, here's a couple of videos to get you in the mood:

History of the Lakers/Celtics rivalry:

A couple of longer videos, but you should watch them if you wanna spend your morning with a gigantic smile on your face: