The five greatest Mark Madsen moments of all time 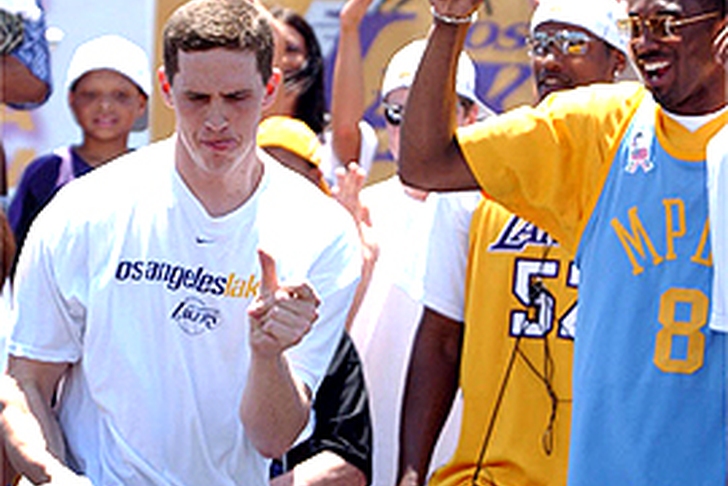 Mark “the Mad Dog” Madsen only spent three seasons with the Lakers, but what beautiful seasons they were. Madsen played with an intensity that made Tyler Hansborough look like Vince Carter, and his focus and dedication made him an instant fan favorite. Madsen was recently hired as an assistant coach with the Lakers, which is as good an excuse as any to revisit his greatest NBA moments.

This wasn’t with the Lakers, but we couldn’t put this together without including Madsen’s most impressive dunk– taking off from just inside the free throw line, Madsen threw one down on the Milwaukee Bucks, earning the first (and as far as we know, only) top-10 highlight of his career.

4. Madsen plays with one bare foot:

This is everything you need to know about Mark Madsen, in one 55-second video: after losing his shoe making a move into the paint, Madsen stays with the play, gets his own rebound, and nails the putback.

Instead of putting his shoe back on and falling behind the play, Madsen sprints back on defense and takes his sock off so he can get better traction. The Lakers eventually called a timeout so Madsen could get his shoe back on, but he was totally ready to play with one bare foot for as long as he needed to.

3. Madsen’s speech at the 2001 Championship Parade:

Madsen’s enthusiastic bilingual speech is even better when you hear the awful intro Chick Hearn gave him: “this guy went to Stanford…he didn’t play very much…he was pretty much the team errand boy…Mark Madsen!”

The Mad Dog was completely unfazed. Look at that grin!

2. The Mad Dog gets his groove on:

There are probably fifty magical things about this video, taken at the 2002 championship parade, so it’s hard to know where to start. Let’s break it down:

- The Dad jeans. Oh, the Dad jeans. It was probably 173 degrees in Los Angeles that day, but that wasn’t stopping the Mad Dog. While everyone else was appropriately dressed in shorts, Madsen proudly rocks the “math teacher in a Sears catalog” look, complete with a belt and tucked-in t-shirt.

- At 1:09, Madsen abandons the twist to wave a pretend lasso in the air. We hope the cattle of southern California were appropriately terrified.

- This isn’t a Madsen thing, but you have to love Shaq rapping along to It Takes Two, then giving up after like, less than a minute. “Unh, yeah, unh, c’mon, yeah, say three-peat (repeat x 30)”

1. Madsen’s speech at the 2002 championship parade:

This speech was somehow even better, even though this time everyone knew what was coming (right down to the Dad jeans). When Chick Hearn gets him on stage and tells him to dance, Madsen doesn’t miss a beat – he immediately starts grooving, and motions for the band to turn up the music.

Not everyone would have been such a good sport (can you imagine Chick telling Kobe to dance?). The enthusiasm and amazing sense of humor that the Mad Dog showed are what made him one of our favorite Lakers of all time.