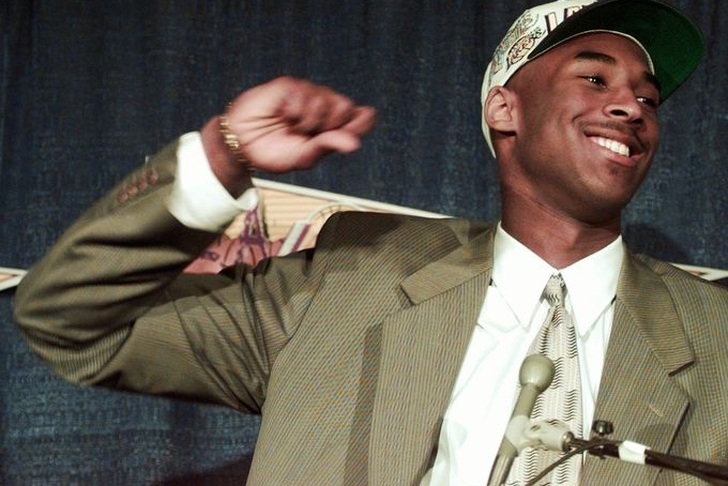 Kobe Bryant is one of the greatest players in NBA history, and may go down as the greatest Lakers player ever. But, had rookie NBA head coach John Calipari trusted his gut instinct in 1996, the history of the NBA could have unfolded in a completely different way.

John Calipari was the head coach of the New Jersey Nets in 1996, and was amazed by what he saw in 17-year-old Kobe Bryant when Bryant came to work out for the Nets in summer 1996 before the NBA Draft. Bryant, attempting to follow in Kevin Garnett's footsteps and jump right from high school to the NBA (a move nearly unheard of before Garnett made it in 1995), put on a show for the Nets coaches, and virtually guaranteed that they'd select him with the #8...if he lasted that long.

Calipari worked out Bryant three times at Fairleigh Dickinson University, and three times came away mesmerized. "If you watched the workouts," Calipari said in 2011, "you would say either this kid was taught to fool us in these workouts, or he's ridiculous."

Or both. No one knew it at the time, but Bryant and his agent Arn Tellem were about to fool Calipari in a staggering way.

After the three workouts with the Nets, Kobe worked out for Lakers GM Jerry West, who instantly decided he wanted to draft Bryant. Given the fact that Kobe grew up a die-hard Lakers fan and was enthralled with Magic Johnson, it was an easy sell for West - all he had to do was convince Kobe and his agent to threaten to not play for anyone who drafted him other than the Lakers.

There was just one problem, though...the Lakers held the #24 pick in the draft, and there was no way that Kobe would last that long, no matter what he told the teams that held the first 23 picks.

Jerry West had some tricks up his sleeve to ensure the Lakers were able to select Kobe. First, West was 100% confident that the Lakers would land superstar free agent center Shaquille O'Neal in July, making Lakers starting C Vlade Divac expendable...and the Charlotte Hornets, who owned the #13 pick, desperately needed a big man.

As draft day grew closer in June 1996, Calipari made it clear to Kobe that the Nets were going to choose him with the #8 pick. That's when Kobe and his agent pulled off the biggest bluff in sports history.

“Jerry (West) wanted Kobe, so he basically called up and talked Calipari out of drafting him,” explained Hal Wiseel, who was with the Nets at the time. West also encouraged the Bryant family to talk to Calipari and explain that their son really wanted to play for the Lakers. “West knew if we didn’t take him at eight, he’d drop to Charlotte, and he could make the deal with Charlotte,” Wissel recalled. “Cal was young in the league and, hey, it’s Jerry West on the phone.”

On draft day, Calipari met with Nets owner Joe Taub for lunch and informed him that the team intended to draft Bryant that night. The only problem was, Bryant wasn't interested. He called Calipari after his lunch with Taub, and Bryant's agent, Arn Tellem, called Nets GM John Nash. Both Kobe and his agent declared they wanted no part of Jersey, and Tellem even threatened that his client would play in Italy instead (where Kobe lived for much of his youth) if the Nets ignored their wishes.

Some members of the Nets organization told Calipari to stand strong and not get pushed around. Others suggested the safe pick – promising Villanova senior guard Kerry Kittles. It was the call of a lifetime.

‘Everybody knows that I was talked out of [it],’ Calipari said recently. He picked Kittles, a good player with bad knees. Bryant went to Charlotte, then was traded instantly to L.A. for Divac. After that, you know the rest.

Calipari was 3-17 when fired by the Nets in his third season, and to rub salt in the wound, he was forced to take a humiliating walk out of Miami Arena to a waiting Cadillac.

Calipari would spend one year as an NBA assistant for the 76ers before re-emerging at the University of  Memphis as head coach in 2000. Coach Cal, as he became known, did pretty well for himself there, and was wooed away by Kentucky in 2009. Calipari won his first NCAA Championship in 2012, 16 years after missing out on a young Kobe Bryant.