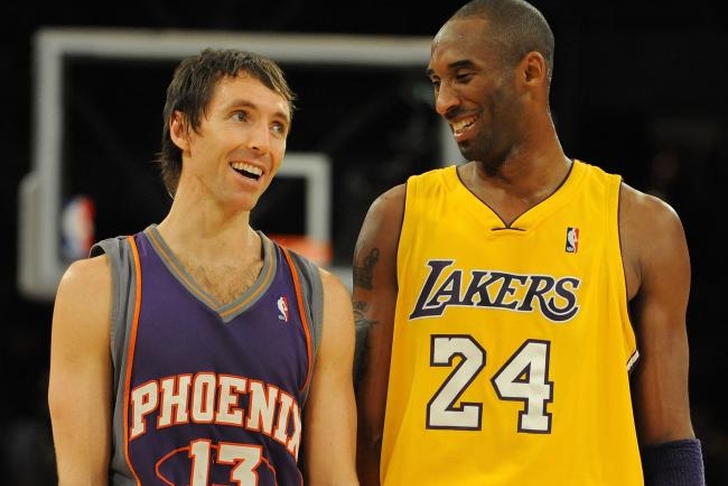 Apparently the NBA lockout didn’t stop the big market teams from spending as lavishly as they would like. With the dial of a number, swipe of a debit card, or whatever it took to make it happen, the Lakers may have made the biggest splash of 2012’s free agency with acquiring Steve Nash.

With the Lakers having a glaring weakness at point guard for years on end, it’s finally no longer an issue when you add the eventual Hall of Fame point guard to a team in need of his efficiency, scoring and elite passing skills.

In adding Nash, the Lakers now are in position to put out a starting five of Nash, Kobe Bryant, Metta World Peace (assuming he isn’t traded), Pau Gasol and Andrew Bynum. Amid trade rumors of Bynum going to Orlando for Dwight Howard, there’s reason to be skeptical of the Lakers feeling the need to make a move of that nature when you add a point guard who can make that frontline more efficient and effective.

The most interesting narrative of Nash becoming a Laker is how he affects Kobe Bryant’s production. Nash’s presence does present the possibility that Kobe’s numbers will decrease but that should be seen as an opportunity, not a threat of any sort. Kobe’s numbers last year reflected those of a volume shooter still capable of scoring at an elite level, but the Lakers need more team basketball if they are looking for another deep postseason run.

When the Lakers added, or nearly added, the services of Chris Paul last December, the wonder was how it would affect Kobe’s effectiveness on the court. Kobe hasn’t had the luxury of playing with a point guard who can set him up and take the ball out of his hands to prevent wear and tear down the stretch of the season. Nash’s ability to bring the ball up the court and find lanes that no one else in the NBA is capable of seeing will be a welcome skill for Kobe and the Lakers. Kobe’s 28 points per game on 42% shooting last year can turn into a welcome sight of 25 points on 46-47% shooting. That narrative aside, the production of Bynum of Gasol can be even more efficient with them no longer to have to always create shots for themselves when looking to dominate opposing frontlines.

Sure, the Lakers added a 38-year old point guard with a bad back and defensive shortcomings, but that’s easier to harp than to give credence to. In adding three-point shooting to a team that sorely needs it, the Lakers now space the floor for Bynum and Gasol to operate in the post and mid-range area, respectively. It will also allow Kobe more catch-and-shoot opportunities from mid-range, where he’s arguably the best of all-time. The most important thing to consider is how much this affects the Lakers’ role players.

In adding a guy who helped Jared Dudley, Channing Frye, Marcin Gortat, Shannon Brown, Hakim Warrick, and Robin Lopez to career years, the Lakers now help their bench by adding a starter. Now, the Lakers can get creative with their lineups and not worry about benching Kobe due to him no longer being the only guy on the team who presents a consistent threat off the dribble. Steve Nash can help World Peace, Jordan Hill (assuming he returns), Josh McRoberts, Steve Blake and even the developing Andrew Goudeluck play more effectively and to their strengths because he creates such a variety of shots. From driving and kicking to the open man for the three to dishing it off to the big man for an easier finish, Steve Nash makes this Lakers team more fun to watch and a bit more formidable.

There’s a lot of free agency left and even more of the upcoming NBA season to play, so it’s a tad bit early to crown anyone winners, champions or even finished products. But if we can call this Nash acquisition anything, we can call it a pretty good upgrade.