Steve Nash: The Champion Who Should Have Been 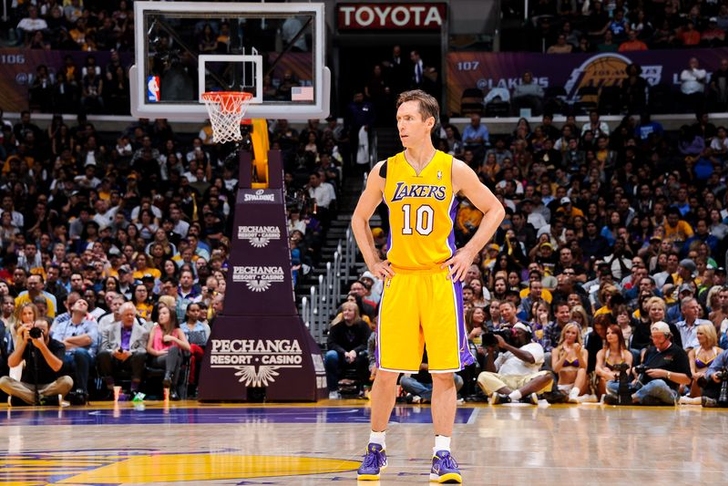 Since 1996, we've marveled at Steve Nash's brilliant passing, absurd efficiency, and clever trickery. Now, the curtains have begun closing on one of the NBA's most unique careers. The process of a Hall of Fame career ending is always disheartening - nostalgic perspective sets in as you watch YouTube highlights from seasons past, and we start to see that those we once deemed immortal actually aren’t - and Nash is no exception.

That’s what made his first season with the Lakers so painful. With each game missed (32 total), Nash looked more and more mortal. As the losses mounted, the odds of him winning an NBA championship dwindled accordingly. It was a season of bum luck and championship misfortune, and Nash has been no stranger to the latter.

No NBA player is a stranger to playoff misfortune, but Nash’s postseason luck has few contemporaries. His 120 career playoff games are the most ever for someone who’s never made the NBA Finals; his two MVP seasons culminated in special playoff runs hindered by injury (Joe Johnson in 2005) and teammate suspension (Amare Stoudemire and Boris Diaw in 2007); and at age 39, on a middling-at-best Laker team, those painful truths will likely be the closest Nash gets to NBA championship glory.

Championships don’t make or break a career, because the NBA has seen a laundry list of legends come and go without having won a title. The list goes from Charles Barkley to Karl Malone, and includes Nash’s all-time-great-point-guard contemporary, John Stockton. Magical moments and exceptional performances make or break how these careers are etched into our memories, and Nash has provided us with enough signature games and incredible plays to last a lifetime.

After an ugly divorce from the Mavericks, Nash returned to the Suns franchise that drafted him. Many expected inspired play, but none (aside from Nash, maybe) foresaw an era that revolutionized modern basketball. The ‘Seven Seconds or Less’ style of basketball Nash, then-Suns coach Mike D’Antoni, and the Suns adopted was a unique anomaly that few have successfully replicated.

With Amar'e Stoudemire and Shawn Marion as his playoff sidekicks, Nash was the maestro for an offense that alternated first and second place finishes in team offensive rating (number of points scored per 100 possessions) in Nash’s first four years back, averaged 55.5 wins in his first six seasons, garnered six top-two division finishes over his eight-year stint, and advanced to three Western Conference Finals.

During those eight seasons, Nash’s numbers were absurd, both in their efficiency and effectiveness. He shot 51% percent from the field, 43.7 percent from three, and 92.1 percent on free throws; efficiency liable to garner praise over the course of one season, let alone over an eight-year stretch. These numbers shouldn't distract from the 16.3 points and 10.9 assists per game he averaged from 2005-12, numbers that (when combined with his aforementioned efficiency) no other player accumulated in a single season, let alone averaged in multiple seasons.

Unfortunately for Nash, those numbers never resulted in a title, merely great but ultimately unsuccessful runs at one. Sure, you can focus on Nash’s notably underwhelming defense, but you’d be overlooking so much. When the stakes were raised, so was Nash’s game. In 67 playoff games with Phoenix, he averaged 20 points and 10.7 assists, with a shooting line of 50/39/91 percent.

These numbers are accompanied by special performances that further-etch all-time greats into our brains. There's his insane 48-point spectacle versus Dallas in Game 4 of the Western Semis, and that was followed by a triple-double in Game 5 and a 39-point effort in Game 6.

Then, you have the 2010 Western Conference Finals run no one anticipated. That year, Nash had his eye swollen shut by a Tim Duncan elbow in Game 4 of the Western Semis, and he returned to close the series with 20 points and nine assists. Following that series, Nash led a Suns team that gave the eventual-champion Lakers all they could handle in a six game Western Conference Finals. These instances, along with plenty of others, showcase Nash as a brilliant player with a championship-level pedigree matched only by his bad luck.

Everyone remembers that Amare Stoudemire and Boris Diaw were suspended for Game 5 of the 2007 Western Conference Semis, but that suspension clouds just how exceptional Nash was. During that series, Nash averaged 21.3 points and 12.7 assists, and shot 48 percent from the field, 52 percent from three, and 86 percent from the line. When Stoudemire and Diaw were suspended, the series was tied 2-2; the Suns eventually lost two straight and dropped the series. But Nash's hopes from a title weren't squandered just by untimely suspensions and superior teams.

Loyal To a Fault

Despite Nash’s status as a franchise player, the Suns never seemed to fully invest in constructing a championship team. Though they had Nash, Stoudemire, Marion, and a coach capable of annually leading a team to 50-plus wins, the Suns made notable trades that wouldn’t have only won Nash a title - they would have kept him in Phoenix to this day.

After their Cinderella playoff run in 2010, the Suns didn’t re-sign Stoudemire, who eventually reunited with D’Antoni in New York. In 2005, Joe Johnson was famously traded to the Hawks after contract negotiations fell through; Johnson spent only one season as Nash’s backcourt partner. Marion eventually won a championship with Nash’s former Mavs team, an unquestionably tough pill for Nash to swallow, especially considering the Mavs made two NBA Finals appearances after his departure.

During Nash’s second Phoenix stint, the Suns traded away the draft rights to Luol Deng, Nate Robinson, Rajon Rondo, Rudy Fernandez, and Marcin Gortat. As the Suns continued to fight more against the luxury tax than for an NBA championship, Nash gave them the fighting chance they missed since the days of Charles Barkley and Kevin Johnson.

Without Nash, Stoudemire and Johnson became the NBA’s poster children for albatross contracts, and neither have advanced to a Conference Finals since leaving Phoenix. D’Antoni has had the same misfortune, though he’s been reunited with Nash in Laker purple and gold.

Rondo and Deng have become All-Stars at their respective positions, while Robinson and Fernandez became respectable role players. Gortat eventually became a Sun, but long after the days when his physical defense, rebounding, and post scoring could have been the difference for a championship-level Suns franchise.

Instead, Gortat is part of the rebuilding project Nash decided he couldn’t partake in. Nash ended his special run with the Suns to seek a championship with the Lakers.

The Title Run That Never Was

Despite the aforementioned magic that took place during his second stint with Phoenix, the Lakers were supposed to be Nash’s best chance at a championship. He joined one of the best shooting guards in NBA history (Kobe Bryant), the best center he’ll ever play with (Dwight Howard), and a premier power forward (Pau Gasol), all of whom had previous NBA Finals experience. Finally, Nash had the keys to the Ferrari that everyone else could only envy, assuming you’re not into the whole ‘LeBron James-Dwyane Wade-Chris Bosh’ thing.

Then, the 2012-13 season happened. The Lakers introduced Nash to dysfunction, ineptitude, and disappointment he hadn’t known in Phoenix. Mike Brown was fired as coach after only five games, and Phil Jackson was expected to replace him until D’Antoni was introduced as Brown’s replacement.

Eventually, Howard’s injury-plagued season proved the difference between championship expectations and fighting for a playoff berth. As the Lakers limped towards the 7-seed, national focus quickly shifted from the Lakers' championship aspirations to Howard's impending impending free-agency.

Adding insult to injury (literally), Gasol never saw eye-to-eye with D’Antoni’s system, bouncing between sixth man roles and acting as the floor-spacing big man he isn’t. Bryant, though his exceptional form never wavered, required more on-ball responsibilities than any player Nash had ever worked with in Phoenix.

Oh, what could have been

In the end, Nash missed 32 games (his most since 1999), established a 17.5 percent usage rate (he averaged 21.9 percent in the previous twelve years), and collected a player efficiency rating of 16.0 (down from his career PER of 20.0. Simply put: you couldn’t recognize Nash last season, at least not consistently.

Despite the 12.7 points and 6.7 assists per game that fell below expectations, Nash showed signs of his former self, and more of the same this season could elevate the Lakers. In the ten games Nash dished out at least ten assists, he averaged 13.1 points, 10.7 assists, 3.1 rebounds, and 2.8 turnovers, and shot 51 percent from the field and 91.3 percent on free throws. The most promising result of those efforts was the Lakers’ 6-4 record in those games, and three of those losses were by seven points or less.

Unfortunately, the elephants in the room are Howard’s departure to Houston and Bryant’s recovery from an Achilles tear. Despite last season’s struggles, Howard still compensated for Nash’s defensive shortcomings, especially given the Western Conference’s plethora of quicker, more athletic point guards easily capable of getting past Nash. Bryant’s rehab, though looking promising, will still require him to adjust to life with a different body and decreased mobility.

Of course, Gasol and Howard’s replacement, Chris Kaman, won’t make up for Howard’s defense, but the Lakers weren’t defensive juggernauts with the All-NBA center on board. Aside from Bryant, Nash will clearly be the Lakers' secondary focal point this season. They’ve added capable floor spacers in Nick Young, Wesley Johnson, and Xavier Henry, Jordan Farmar has returned to back up Nash, and Gasol and Kaman are capable of consistently hitting mid-range jumpers and posting up.

It looks more likely than ever that Nash will retire without a title, but from interviews it sounds like he’s content with never winning a championship, knowing he honestly gave it his best shot.

The upcoming Lakers season can go in a number of different directions, as we learned last year when four future Hall of Famers suffered from unexpected injuries and unforseen ineptitude. However, one more masterful season from Nash would be a beautiful note to end his career on. Certainly, Kobe Bryant providing the same would be just as golden, but we’ve seen him bounce back from bodily betrayal often enough to expect a familiar Bryant.

This season, it would be fantastic to see a familiar Nash - the maestro. The ‘Seven Seconds or Less’ Nash may be a distant memory, but ‘Ten Seconds or Less’ will suffice. That first step may be a bit slower, but the crafty wizardry and veteran savvy are still there, waiting to put on one more demonstration. You have to admit, you'd love to see it too.

If this season offers anything, let’s hope Steve Nash shines bright in Laker purple and gold, before those curtains close and nostalgic memories are all we have.