Resigning Pau Gasol should be about chemistry and legacy, not money for Lakers 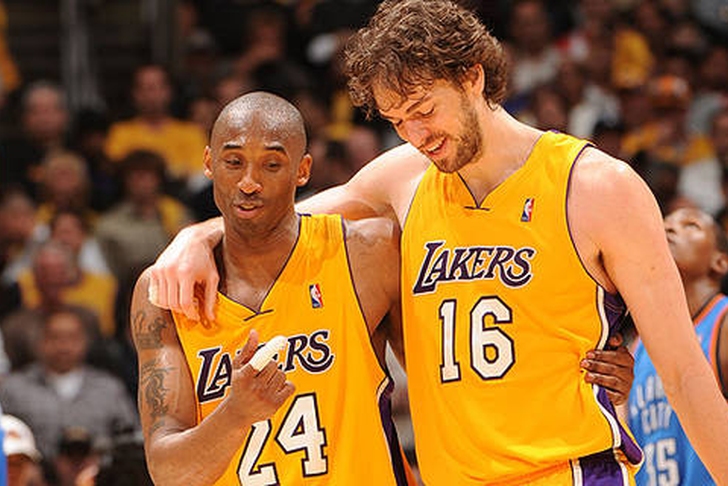 Amid a deep pool of NBA free agents this summer, Pau Gasol still stands tall. The 33-year-old veteran decided to exercise his options and will be meeting with the Thunder, Bulls and Warriors in hopes of finding what will likely be his final destination as a player.

Even at this stage of his career, Gasol holds much value at the power forward/center position and is a serviceable second or third option on a title contending team. With his extensive playoff experience and range of skills, Gasol remains an invaluable asset.

Last season, Gasol earned $19,285,850 and performed adequately under the circumstances. He may have been slightly overpaid, but the seasoned Spaniard still averaged 17.4 (PPG) and 9.7 (RPG), while shooting 48 percent from the floor for the 27-55 Lakers.

In many ways, a final reunion between Gasol and the Lakers would make sense. Luke Walton recently advocated for eventually retiring his jersey and there has been no shortage of appreciation from both sides. Sure, the past few years have been filled with frustration and endless trade rumors, but in the end, nothing really came of them.

As the Lakers offered Kobe Bryant a two-year, $48.5 million contract out of respect for his services over the years, why wouldn’t they at least consider doing the same with Gasol?

When Gasol was traded to the Lakers in exchange for Kwame Brown, Aaron McKie, Javaris Crittenton, two first-round picks and the rights to Pau’s brother Marc, who the Lakers drafted with a second-round pick in 2007 (all thanks to Jerry West), he was one of the best big men in the league. With his mixture of size, fundamentals and IQ, Gasol was a mismatch for his opponents.

In short, many may have forgotten how big a deal it was when he first arrived in Los Angeles during the 2007-2008 season.

Without Gasol’s addition, the Lakers may have two less championships under their name. Gasol has been an integral part of the Lakers organization in the post Shaq/Kobe era and will go down as one of the better big man that has donned an NBA jersey.

From his four All-Star appearances to multiple title runs, Gasol has brought quite a deal to the Laker organization in a short period of time.

There has been a special connection between Gasol and his Laker teammates since he first joined the team. Few players have developed a deeper relationship with Bryant than Gasol and have sustained a high level of play in the process.

It would provide a storybook ending if the two could ride out their remaining years together.

Gasol is expected to accept an offer of around $4 million for the upcoming year and under the projected budget for the Lakers (around $30 million), Gasol would be affordable.

Question is: are the Lakers interested in inking one last deal with a player who has provided so much long-term, but very little as of late?

The Lakers are pursuing two max deal players in LeBron James ($20.7 million) and Carmelo Anthony ($22.4 million), both of whom are looking for around $20 million next season.

If all works out for Gasol, he may just be running alongside one of them next season as well as his longtime teammate, Bryant.