NBA Free Agency: 5 players that would help the Lakers return to contending form 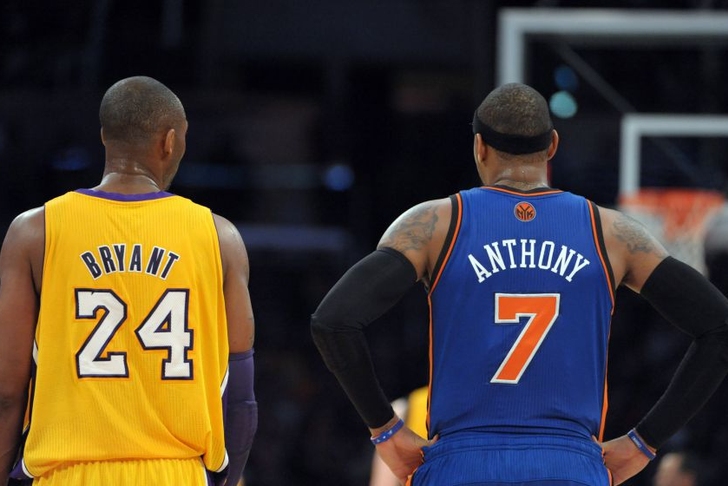 After drafting Kentucky's Julius Randle with the seventh pick in the 2014 NBA Draft, the Lakers will now turn to what looks to be the biggest free agency period since LeBron James and company joined the Heat.

General Manager Mitch Kupchak recently said the Lakers are "going all out" in this year's free agency period. This usually means big moves are on the horizon in the case of the Lakers.

Names like Carmelo Anthony (Knicks) and LeBron James (Heat) have been floating around the league since both players opted out of their current contracts and the Lakers haven't been shy about pursuing them. Problem is, so is every other team with the appropriate cap space.

The Lakers (27-55) are coming off one of their worst seasons in franchise history, but in regards to their financial outlook, things look pretty promising.

However, with limited budget and specific needs, the Lakers, along with other teams, will begin to conduct their short lists of which free agents to go after.

James and Anthony are among the obvious candidates, but who else should the Lakers target?

Recently after opting out of his current contract, James is reportedly wanting a max deal contract with the Heat, which would be a five-year, $130 million deal. While this alludes to James prioritizing his choices beginning with keeping his talents in South Beach, a drastic roster change is what James has asked for in return.

Considering his teammates Dwayne Wade and Chris Bosh also opted out of their contracts, this will be a question mark at best until told otherwise.

For the Lakers, this is promising news. If there is a legit assumption that James will leave the Heat, big market teams such as the Lakers, Knicks and Bulls will likely be atop of his list with the Cavaliers having an outside shot.

The idea of James ending up in Los Angeles alongside Bryant have always been around, but could be the first real opportunity for both parties to ink a deal.

It may just be wishful thinking, but when has that ever stopped the Lakers from getting who they want?

Also, how would Randle take the news, who recently said he would rather play against James than with him?

The possibility of landing both James and Anthony has been one that the Lakers have thought about, but is one that is also unlikely.

With both players wanting max contracts with either their current team (which would be roughly $30 million more) or new one, the Lakers simply won't have the money to sign both if it comes to that.

However, targeting Anthony should and will be among the Lakers' free agency priorities this offseason. Bryant recently reached out to Anthony, who is a well known friend of his from their playing days on the US National team, and one would have to believe this has inserted the Lakers into the Anthony sweepstakes.

If Anthony were to land on the Lakers, the same questions would have to be addressed: can Bryant put his ego aside to play alongside another superstar?

While this question can only be answered in due time, it's one that will be essential when considering targeting Anthony or not. As for now, pursuing Anthony can't hurt the Lakers in any way, shape or form.

As of now, it is unclear as to how much Parsons is currently worth from the perspective of the league. Maybe, that's why the Rockets recently decided to not pick up Parsons' player option, which for the time being, saved them the $964,750 (a bargain in most people's eyes) they were scheduled to pay him.

This doesn't mean that Parsons won't be returning to Houston. It does however, mean that whichever teams make an offer to Parsons, will be met or not met by the Rockets because they have the right to do so.

If you haven't already seen a trend, the Lakers are in desperate need of a small forward. With Nick Young opting out and no true forward signed on for next season, players like Parsons will naturally draw interest from the Lakers.

Parsons is among the rising young players in this league. During the postseason he proved he belonged on the big stage and it is an invaluable asset to any team who shows interest in him.

There haven't been any real rumors floating around between the two parties, but Parsons would be another ideal candidate for the Lakers and would undoubtedly start for the current Laker team.

The Jazz (25-57) finished dead last in the western conference last season. Their roster was simply just not built for success and it showed on a daily basis.

That doesn't mean their starting small forward in Hayward didn't perform at a high level. In just his third season in the league, Hayward proved he was a two-way player that could start for most teams and further showcased his skill set.

For the Lakers, Hayward may just be their guy. Considering the Jazz aren't likely to make any drastic changes in regards to their roster anytime soon, the former Butler forward may just want a scenery change. This is all aside from the fact that he appears to be a player that wouldn't pose any problems related to ego .

If the Lakers fail to grab any of aforementioned forwards, Hayward would more than meet their budget as well as expectations in grabbing a formidable starting forward.

Just keep in mind that the Jazz recently extended an offer to Hayward, making him a restricted free agent.

Judging by the numbers, Thomas was among the best starting guards in the league last season. His Kings (28-54) may have just edged out their Pacific rivals in the Lakers by one spot in the western conference, but the bottom line is that his team wasn't anywhere near what is considered to be a contending team.

No disrespect to DeMarcus "Boogie" Cousins.

Thomas is an interesting prospect because he is yet another rising star that feels he hasn't received the recognition he deserves. It appears that Thomas is looking to succeed in the NBA as a starting guard and in order to do so, he's likely going to have to go elsewhere.

This is where the Lakers figure in. With an unreliable Steve Nash who recently admitted being trade would make sense, the Lakers are in dire need of a starting point guard.

With capable scoring and passing ability, Thomas would indeed fit with any team including the Lakers. The one obstacle for the Lakers in pursuing Thomas however, will be the fact that the Kings do return an intriguing roster that is headlined by Rudy Gay, who recently opted in for his final year of his contract.

It will be up to Thomas whether or not he wants to risk signing a long-term deal with the Kings or take his talents to a big market team like the Lakers, who may just figure out how to return to contending form next season.

The Lakers have already begun their campaign to bring Swaggy P back to Los Angeles for a couple more years. Just take a look at this billboard.

Young also, admitted he would be ok with sacrificing some of his pay check to return to Los Angeles.

Last season, Young was arguably the best player on the Lakers and brought any excitement/charisma that hadn't already been sucked out of the Staples Center. Going back to the fact that the Lakers need a small forward, Young makes a lot of sense.

We'll just have to wait and see what the unpredictable Young has in store for his immediate future. Young recently opted out of his current contract with the Lakers.

Follow @ChatSports and @HayDayKim for all your sporting news