Loss to Memphis reveals how Lakers should play moving forward 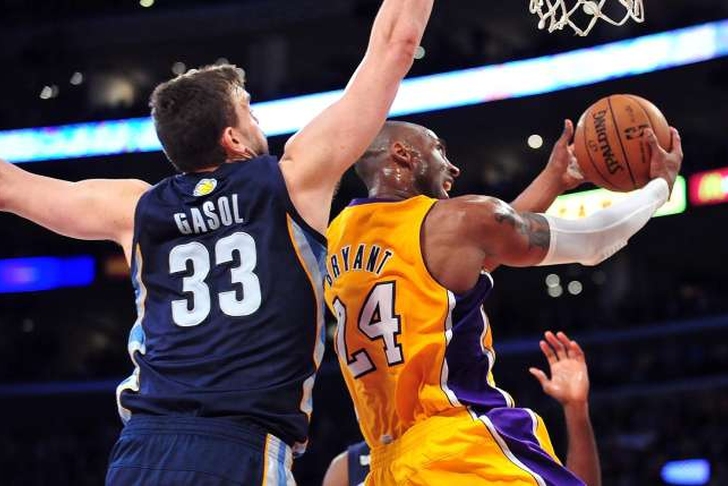 Kobe Bryant, the NBA record holder in missed shots, didn’t take one for the first 13 minutes against the Western Conference leading Memphis Grizzlies. And no, he didn’t play with a broken finger. Instead, Bryant went 5-for-15 and finished with a team-high 22 points.

The Lakers (3-12), who are currently the second worst team in the NBA, actually held their own against a hot Grizzlies (13-2) team through the fourth quarter and contained Marc Gasol, who was coming off of back-to-back 30-point performances, to just three points in the first half. Gasol would however, later finish with a team-high 19 points and 11 rebounds.

Staples Center may have been disappointed with the eventual 99-93 result, but there were certainly a few bright spots for Byron Scott to take away.

Four Lakers finished in double figures: Bryant (22 points), Jeremy Lin (14 points), Nick Young (13 points) and Jordan Hill (11 points) and they also shot 42 percent from beyond the arc as a team. Had it not been for late scoring drought, the game could have gone the other way.

In a season that is more about eclipsing 20 wins than anything, Bryant and Co. need to study this game film and implement the positives. That means a redefined role for Bryant and consistent ball movement for a talent-drained Lakers roster.

Since the return of Nick Young, the Lakers have regained their dignity. Sure, their record alludes to the contrary, but the Lakers have actually experienced their fair share of close games as of late. No one is saying the Lakers have any remote chance of making the postseason, but that doesn’t mean they can’t be competitive in the majority of their games.

Even with all his injuries, Bryant is still a top tier player in this league and has the ability to keep the Lakers in the game. The question will be whether or not Bryant, the league’s scoring leader (26.4 PPG), can finish his career on the very path Tim Duncan set on a few years ago, one that essentially accepts a lesser role.

For a team that can’t confidently name their second best player, Bryant needs to spread the wealth for three quarters and unleash the Black Mamba when necessary. Scoring will be a problem for the Lakers and Bryant is the only player that can help their cause. Passing hasn’t per say been a part of Bryant’s repertoire, but that doesn’t mean he can’t implement it for the few remaining years of his career.

Desperate times call for desperate measures and it’s about time Bryant takes it down a notch. Not only for his own sake, but also for the immediate future of his discouraged teammates.

No one knows where this organization will be in the near future, but for now, there is at least a window of opportunity to avoid becoming a league-wide joke from a competitive standpoint. The Lakers are currently the worst defensive team, the least they can do is push the tempo, score some points, and avoid living up to what could end up being a franchise-worst record.

This is the only way they can remain afloat for the remaining 67 games if that’s still a possibility.