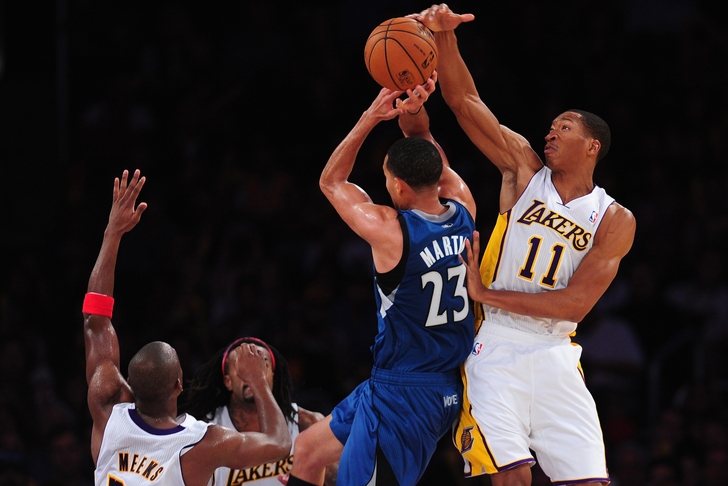 The Los Angeles Lakers (12-13) return to Staples Center on Friday night as they host the Minnesota Timberwolves (13-13) at 7:30 pm pacific. Like much of the season up to this point, the Lakers will once again be without Kobe Bryant. Bryant will be out six weeks after injuring his left knee during their last game. The Lakers will also be without their three point guards Steve Nash, Jordan Farmar and Steve Blake, leaving Xavier Henry to start at the point guard position tonight. Nick Young and Jodie Meeks will also see a little more time at the point guard position along with possible playing time for the newly acquired Kendall Marshall.

While Kobe was out for the first time the Lakers as a whole played with a lot more energy and much more fast-paced, a trait of Mike D'antoni's coaching scheme. All three Henry, Young and Meeks can get out and run the floor and there will be plenty of running from the Lakers in tonight's game.

Pau Gasol and Jordan Hill both need to play big tonight as they square off against arguably one of the top front courts in the NBA with Kevin Love and Nikola Pekovic. Love brings an overall game that is unparalleled from any big man in the NBA today and is in the middle of a hot streak averaging 30.8 points, 13.4 rebounds and shooting a ridiculous 46 percent from the three point line over his last five games. An unheard of number for a guy who stands at 6' 10". Pekovic is a bruiser down low and will undoubtedly bang bodies with Hill, Gasol and Sacre in the paint. With Love capable of stretching the floor by stepping out to the three-point line it will free up work for Pekovic down low. Kevin Martin scored 27 against the Lakers their last time out and will look to continue that success tonight working against Wes Johnson and company. Johnson may be forced to cover Love causing Meeks and Young to slide over and guard Martin, a match-up that definitely favors the Timberwolves.

Prediction: Kevin Love continues on his tear and the Timberwolves go in to Staples Center and beat the somewhat out-of-sync Lakers.