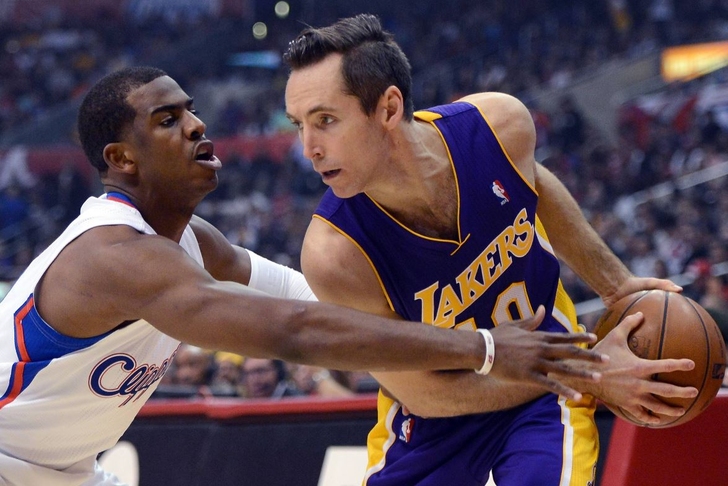 The Los Angeles Lakers are opening their 2013-2014 NBA season tonight against the Los Angeles Clippers at the Staples Center. A game in which the Lakers banners will be on display as it is technically a home game for the Purple and Gold. I already highlighted this as a highly anticipated game where the Lakers have a chance to win respect from the NBA and LA fans alike. The Lakers will be without superstar Kobe Bryant who is still recovering from a torn Achilles tendon.

With reports of a possible Steve Nash, Steve Blake, Nick Young, Shawne Williams and Pau Gasol starting lineup the Lakers can be in for a quick start by the Clippers. This lineup is

just as slow if not slower than the lineup that was put out last season. With Steve Nash guarding Chris Paul the dynamic Clippers point guard will have the opportunity to get open shots or facilitate the ball as he draws other defender to himself. The Lakers are not only mismatched in the back court but in the front court as well. Blake Griffin has had his way with Pau Gasol thus far in their matchups and may draw Shawne Williams in yet another match-up that he can win. Either way Gasol or Williams will have to deal with Griffin or Deandre Jordan, two big men who are much more athletic than the Lakers bigs.

With all that said the Lakers can still find a way to win this game. The Clippers are a fast paced team who like to score in transition. For the Lakers to come away victorious they will need to find a way to slow the game down. Nash and Blake will need to walk it up as much as they can and be careful with the ball to avoid the breakaway dunks that the Clippers love to do off of defensive steals and hustle.

put in good minutes in the league. Players like Jordan Farmar, Chris Kaman and Jodie Meeks will have to come out and add scoring from the bench. Farmar has had a good preseason so far and shown that he is very happy to be back with the Lakers. Kaman off the bench is somewhat puzzling but it immediately brings legitimacy to a second unit which may not have had that if he was starting. While Jodie Meeks brings a superior three-point shot off the bench. These three will need to play with high-energy off the bench, this will help the Lakers squad to a win.

This game could be a Clippers blowout or the Lakers could stick around through three and a half quarters and let their experience get them a late game win. Yes, even without Kobe Bryant.