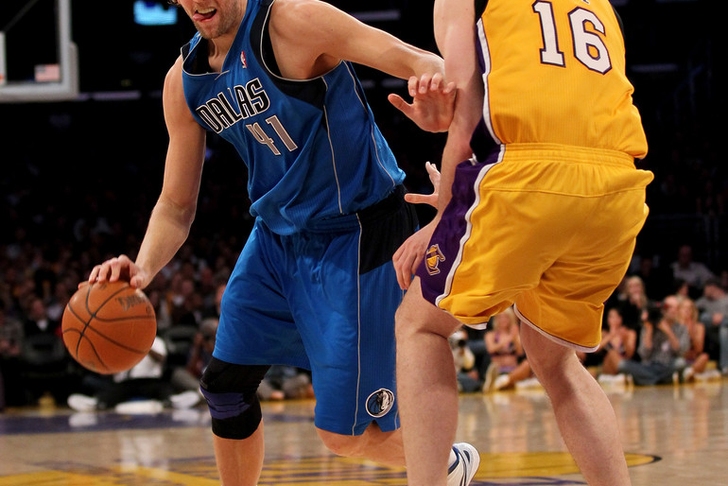 The Los Angeles Lakers (2-2) start their Texas swing tonight as they travel to Dallas to take on the Dallas Mavericks (2-1). Both of the Maverick's wins have come at home in the American Airlines Center. Like the first four games of the season the Lakers will be without superstar Kobe Bryant. Bryant has led the Lakers to an 8-2 record over the last ten games in the American Airlines Center and are looking for their sixth straight win in Dallas.

Pau Gasol has been impressive thus far this season along with the Lakers bench who are contributing lots of quality minutes. Gasol has a double-double in three of the four games this season and is averaging 15.8 ppg and 11.0 rpg.  Head Coach Mike D'antoni has been showing off some extreme rotations that you see more in the college ranks as opposed to the NBA. Chris Kaman, Jordan Farmar and Nick Young are the headliners coming off the bench for tonight's game. Young was a starter until last game when Xavier Henry was given the starting nod and will probably get the opportunity again. Henry only played 26 minutes and that itself shows that the bench is just as important for this team as is the starting lineup.

The Mavericks have been doing the opposite of the Lakers and have four players who average 30 minutes or more a game. Dirk Nowitzki has been playing at a high-level and the pairing of him with Monta Ellis has been a success so far in the young season. Both players are combining to score 46.6 points per game which is just above 41 percent of their teams scoring. Dallas isn't exactly a young team and even though they have played one less game than the Lakers, D'antoni will find a way to keep his rotation going tonight and the fresh-legged Lakers will come away with their sixth straight victory in Dallas.