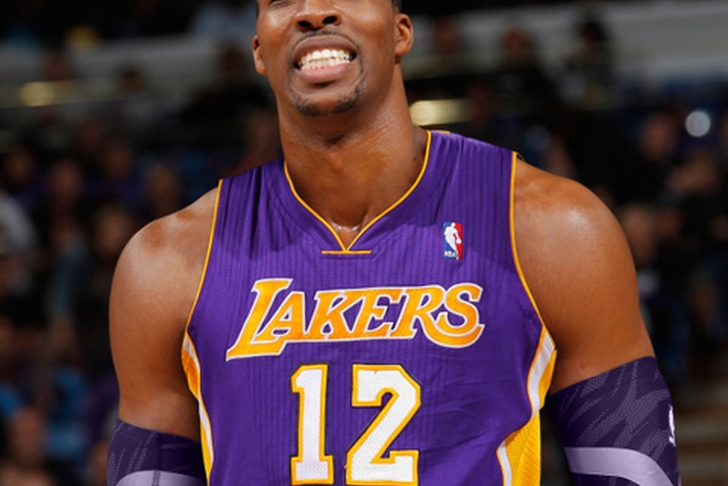 It's here. The most anticipated free agent courtship since LeBron James in 2010 is underway. At 9:01 p.m. PST on Sunday evening, Dwight Howard became a free agent. The Lakers are pulling out all the stops to try and convince Howard to re-sign with the team as he is also being courted by Houston, Dallas, Atlanta and Golden State, among others.

[RELATED: Dwight Howard to meet with Rockets and four others]

Los Angeles specifically requested to meet with Howard last of all the teams, but Sunday night, before meeting with the Rockets, Howard met briefly with Lakers general manger Mitch Kupchak, according to Lakers beat writer Mike Bresnahan of the L.A. Times.

Plus-one for the Lakers, perhaps? The conversation was apparently a simple "hello and good luck" sort of thing, no courtship involved. That comes Tuesday. The Rockets, however, started their courtship right after Howard met with Kupckak.

According to the Houston Chronicle, the Rockets' contingent included James Harden, Chandler Parsons, coach Kevin McHale, general manager Daryl Morey, owner Les Alexander and Hall of Famers Hakeem Olajuwon and Clyde Drexler. Dikembe Mutombo recorded a video message for Howard, and Yao Ming Skyped in from China. The Rockets have long been rumored to be the frontrunners for Howard, with a cohesive young roster that becomes an immediate title contender with Howard inserted as the centerpiece. After the meeting, GM Morey sent out an enthusiastic tweet on the prospects of signing Howard:

Was gr8 meeting with @DwightHoward. Hakeem & Clyde there made it obvious how @DwightHoward & @JHarden13 could be the next gr8 big/wing combo — Daryl Morey (@dmorey) July 1, 2013

The Atlanta Hawks and Golden State Warriors met with Howard in Los Angeles on Monday. The Hawks don't seem to have much to offer Howard from a basketball perspective, certainly not compared to Houston, but they are Howard's hometown team and are making a strong play for him. The Warriors don't have the cap space to sign Howard as a free agent, but they could engineer a sign-and-trade with Los Angeles. The Lakers, however, are said to be uninterested in doing so.

Per @Mike_Bresnahan, the Lakers would rather let Dwight Howard walk than sign-and-trade him and pay luxury tax on Bogut, etc.

That could be a bluff, because agreeing to a sign-and-trade would indicate the Lakers have lost hope on re-signing Howard. Should Howard not re-sign with Los Angeles, the sign-and-trade with the Warriors would at least leave the Lakers with something.

[RELATED: Howard not likely to re-sign with Lakers]

According to RealGM.com, the Warriors are prepared to offer Andrew Bogut and either Klay Thompson or Harrison Barnes for Howard. Bogut, when healthy, is one of the top centers in the league, and Thompson and Barnes are two of the most promising young players. PLUS the Warriors can offer the expiring contracts of Richard Jefferson and/or Andris Biedrins to help the Lakers with cap space.

On Tuesday, the Mavericks met with Howard for lunch, and the Lakers followed for dinner, sending Kupchak, Steve Nash, Kobe Bryant, coach Mike D'Antoni and owner Jim Buss to the meeting. But the highlight was said to be executives from Time Warner, the TV rights holder for the Lakers, as well as executives from AEG, owner of the Staples Center.

Los Angeles' usual trump card - the fact that they are the Lakers and no one else is - won't work this time around. Howard does not enjoy the pressure felt in Los Angeles from both media and fans, and Houston would be a welcome respite on an equally competitive team. The Lakers can offer him one year and some $30 million more than any other team, but per year it only breaks down to about $1.5 million extra ("only"). What the Lakers will have to sell this that they truly are the best fit for Howard's basketball future. Hence this from Los Angeles Times beat writer Mike Bresnahan:

They will sell themselves as the 16-time NBA champions — how could they not? — and they also subtly will remind him Steve Nash is the only player currently under contract after next season.

As in, there’s a massive shopping spree on the way in a year.

After the meeting with Howard on Tuesday afternoon, members of the Lakers delegation said they were pleased with how it went.

Kupchak: "We told [Howard] how important he is to the Lakers...and why we feel this is the best place for him to continue his career."

Nash on meeting with Howard: “I think the Lakers did a great job and it was a really good meeting. I feel really positive about it.”

Howard does not want the process to drag on, and is expected to sign on July 10, the first day he can per NBA rules.