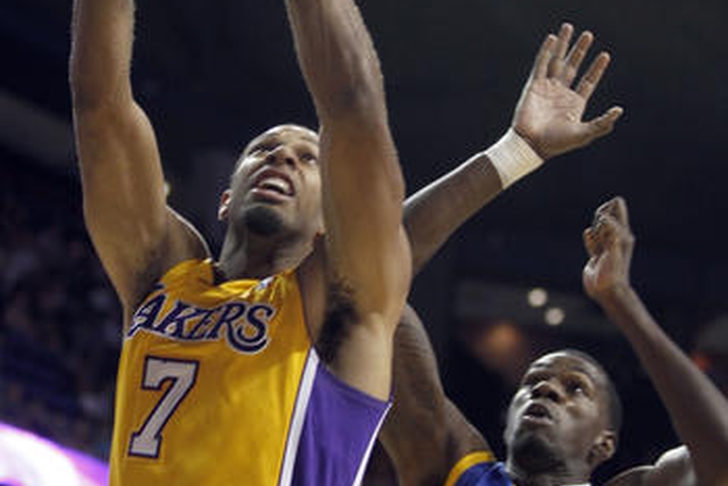 If the Los Angeles Lakers had a mission of trying to see if you could win a NBA preseason game shooting 41% from the field plus 80% from the free throw line, turning the ball over 20 times and grabbing only seven offensive rebounds, then mission accomplished.

Fortunately for the Lakers, the Warriors were even worse from the field, charity stripe and turning the ball over. Golden State's final line featured just 39% from the field, 71% from the line and 23 turnovers. To say that this game was sloppy on both ends is an understatement.

In one of those twists of fate that makes you think maybe basketball gods do exist, Ontario, California was the site and Golden State was the opponent of the Lakers' last preseason victory, nearly three years ago.

Golden State did start its expected starting five but sat them quickly thereafter. Kobe Bryant's absence plus the Lakers' decision to sit Pau Gasol and Steve Nash resulted in the Lakers starting Steve Blake and Jordie Meeks at guard, Jordan Hill and Nick Young at forward and Chris Kaman in the middle.

With Bryant's absence, Los Angeles was able to get significant minutes and opportunities for the majority of its roster. The Lakers had nine players on the court for at least twenty minutes and no player had any more than 15 shot attempts. Bryant's absence actually helps the Lakers right now because they have many roster decisions to make. Getting to see their options in primary roles in games makes those decisions easier.

To further the irrelevancy of this game the venue of the site, the Citizens Business Bank Arena, was only 2/3 full at the start of the game and the crowd waned even more when it saw that neither Gasol nor Nash was playing and the Warriors were sitting their starters.

The Lakers got their first preseason win since October 22nd, 2010 in a sloppy game that drew few spectators and featured players that most casual sports fans couldn't name. It did serve the purpose of giving Mark D'Antoni game film to evaluate players on and right now, that's all the Lakers need.