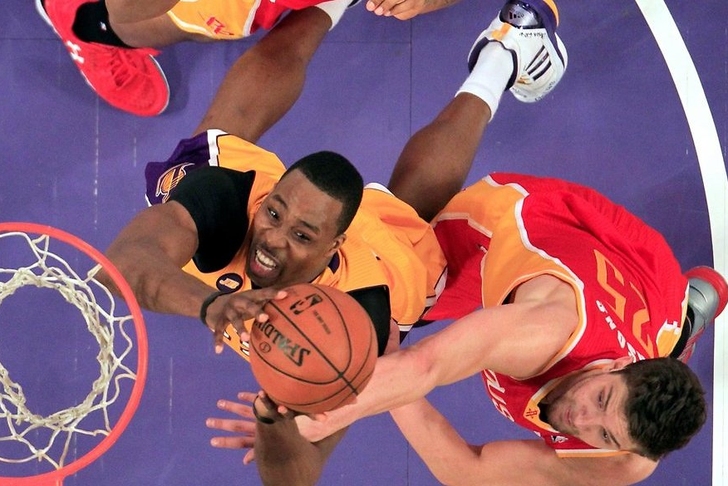 According to the Houston Chronicle, Dwight Howard has been talking with Houston Rockets forward Chandler Parsons "every day," specifically about Howard joining the team. This is particularly worrisome for the Lakers because Chandler Parsons is an up-and-coming star in the league and the Rockets are thought to be a team on the rise as well - together they pose a nice package for any prospective free agent, and Howard is no exception.

Parsons said he texted Howard Thursday night after the Heat won the NBA Championship, "Come to Houston. That could be us (next year)."

And there's plenty more where that came from. From Parsons in the Houston Chronicle.

“I talk to Dwight every day,” Parsons said. “I’ve created a relationship with him, where I feel like we’re very close. He hits me up about everything. I’ve covered pretty much every question he’s had. I basically tell him, ‘We have a chance to be really good without you next year. We’re going to have a good season. Why not come and join us, join our core guys who are for sure to be here and make us great, make us contend for a championship?’

This sounds like it is technically a violation of the NBA's "tampering rule," but really that's never enforced when it's between players. What it sounds like even more, however, is a chance for Howard to go play for a team that will be arguably as competitive as the Lakers, but away from the pressure and media spotlight that Los Angeles brings.