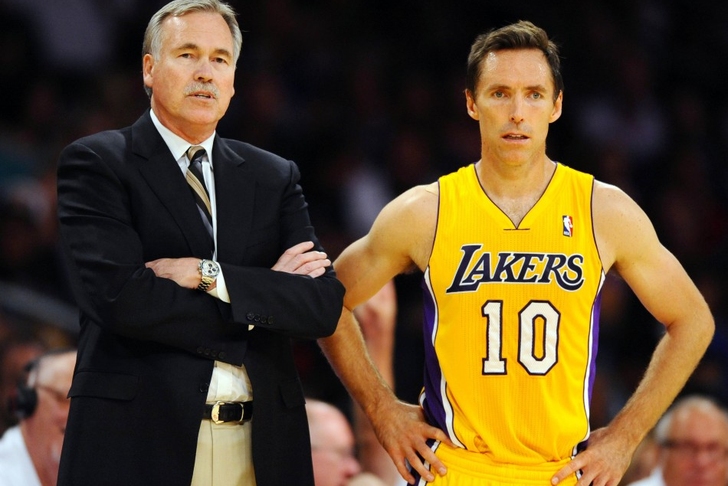 Three games into the preseason and the Los Angeles Lakers have already won two more games this year then they did all of last preseason. Last season the Lakers went without a win and looked lost for the whole preseason. The lost look continued on into the regular season and even though the Lakers made the playoffs it was on a whim and took every ounce of energy that Kobe Bryant could muster. The overuse of himself led to Kobe's season ending injury. That same injury may keep Bryant out of the opening night lineup. But if Kobe is out then who will start in his place?

The Lakers acquired some young talent during the off-season who are capable of playing the shooting guard and small forward position, the positions that Kobe plays majority of the time. Nick Young and Wesley Johnson will prove to be the two biggest fill-ins for Kobe while he is out. Young is an aggressive scorer who has a smooth jump shot while Johnson is an athletic, long swing man who plays good defense and can go on scoring streaks. Johnson is dealing with a slightly sprained ankle but will be ready for the opener.

So for opening night we will say Kobe is out, your starting lineup should look like this:

If there was one thing we learned from the third preseason game it was that Gasol and Kaman can play together and do it well. They played a lot of two man basketball and were able to set each other up for plenty of high percentage shots. With Pao moving to the center position he can play with his back to the basket where he is best and Kaman can shoot his short to mid range jumpers that he has established over his career.

Those are the starters so what is the bench going to look like? Lets get the obvious out of the way, the bench will consist of backup point guards Steve Blake and Jordan Farmar who will both see plenty of time over this season as Coach Mike D'antoni monitors Steve Nash's minutes. Jodie Meeks will be waiting in the wings with his superior perimeter game, giving the Lakers a superb three-point shooter off the bench. Also coming off the bench will likely be the former Jayhawk, Xavier Henry who has been impressive thus far in the preseason. Henry can play the point guard and shooting guard and has shown his ability to score at the hoop or draw the foul. Ultra energy guy Jordan Hill will be the backup for the PF/C position and provides a spark every time he comes off the bench. Hill could also be the Lakers best rebounder and shot-changer around the rim. Once Kobe Bryant returns the bench will get instantly deeper as either Young or Johnson moves back to the bench but while Bryant is out the bench may be a little short and may have many players playing more than one position.

The team chemistry already looks to be better than last season and unlike last year the players are playing with pride while wearing purple and gold. While expectations are lower this year than they have been in year's past the Lakers organization has an opportunity to bring back that pride to the fans and play better than expected.