Los Angeles Lakers News: What are the realistic free agent options in 2014? 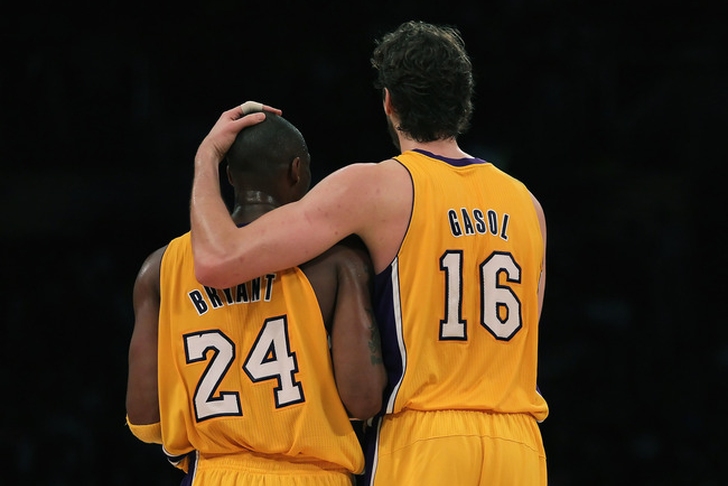 It seems that for basically ever and ever, we've been hearing about how great the 2014 NBA free agent class will be. "Oh, don't worry if Dwight leaves," said Lakers fans everywhere. "LeBron will be available. Paul George is a free agent, and so are Kyrie Irving and Greg Monroe!"

I hate to be the bearer of bad news, but that is exactly what this is. The 2014 free agent class will not be what everyone expects. While many of the hopefuls mentioned above may become open market free agents, there is an even better chance they wont.

LeBron James has a player option with the Miami Heat worth $20.6 million dollars next year and $22.1 million the year after that. Most players would never opt out of a contract like that, but that's not an issue for LeBron, who will get a max-deal no matter where he goes. Still, there's a better chance than not James opts to stay in Miami for the last two years of his contract. And if he so chooses to opt out, it's hard to imagine him not going back to Cleveland, who would welcome him with open arms.

James' teammates, Chris Bosh and Dwyane Wade, both have the same option as LeBron. Both would be crazy to opt out of that kind of deal, as neither is getting a max contract again in their careers. So go ahead and take them off the table, if you were crazy enough to want them anyways.

In fact, here's a list of all of the top possible free agents with player options for next year:

So let's get this straight. Bosh and Wade are not opting out. James might, and the Lakers would go all out for him, but somehow I find it hard to believe he'll come to L.A. Tim Duncan will probably exercise his option and then retire after that year. Anthony, Gay and Randolph are interesting. Z-Bo will be 33 in 2014, not exactly who the Lakers are looking for. Kobe Bryant has said in the past that he would love to play with Anthony, but it's borderline inconceivable that he leaves $23.5 million on the table.

That leaves Rudy Gay. It's unlikely that he'll leave his $19.3 million on the table, as he certainly won't get that in a new contract. If he opts out, however, he would be the best option for the Lakers out of that group. He'll be 28, not young but certainly not past his prime. He would be a great addition to an established team, but he's not a superstar to build around.

The name that has been thrown around as perhaps the most desirable target for the Lakers is Paul George. George is the biggest budding superstar in the NBA, having established himself as the leader of the Pacers at age 23. Technically, it's true that George's contract is up next year. But George will be a restricted free agent, meaning that the Pacers will have the ability to match any contract offer he gets from another team, which they 100 percent certainly without question will, unless team president Larry Bird suddenly loses his mind.

[caption id="attachment_2140" align="alignright" width="307" caption="Unless the Pistons and Pacers are mental, Greg Monroe and Paul George will not be going anywhere"]

Here's a list of top restricted free agents for next year:

Let's get this straight: Monroe, George, Wall and Cousins are not going anywhere. Literally none chance whatsoever. Detroit, Indiana, Washington and Sacramento are going to match whatever contract their player gets offered, so get them off your wish list. The same could be said for Turner and Hayward, who are pretty safe bets to have any and all offers matched by Philadelphia and Utah, respectively.

That leaves Favors and Patterson. Both are young, talented big man who, much like Rudy Gay, would be great additions to teams. But also like Gay, they are not (at least yet) players to construct a franchise around.

Here is the list of top players with team options. Keep in mind, almost all of these players will have their options exercised, especially the ones you want most:

And now here is a list of who might be let go of their contract: Anderson Varejao. That's it. He (and his $9.8 million option) is the only one who might not have his option picked up. The rest are staying. Get them out of your minds too.

That leaves just the actual unrestricted free agents. I'm talking about the likes of Paul Pierce, Hedo Türkoğlu, Dirk Nowitzki and Shawn Marion. Oh and Kobe too. I'm sure that's exactly who everyone had in mind when they talked about how stacked 2014 would be. Lakers fans, you mean to tell me you didn't dream about having a team comprised entirely of players over 35? Here are some of the top unrestricted free agents, with their ages next offseason:

Out of those guys, who do you even want on the team at all let alone as a top-three player? Kobe, yes. Let's assume he'll come back. But after that? Certainly no one north of 35, and I think the Lakers might be hoping for a bit more than Pau and Metta. Hinrich's best days are clearly behind him. Granger and Deng are both solid players, deserving of a starting spot. But they're not a focal point, or even close to it. Bogut is actually probably the best option on that list, as when healthy he's shown himself worthy of his first overall selection in the 2005 NBA Draft. When healthy being some critical wording there, as Bogut has missed at least 10 games for five years in a row and more than half the season in the last two.

So Andrew Bogut, Anderson Varejao and Rudy Gay. Those are the best options for next year, baring a LeBron miracle or some crazy oversight on the part of the Pacers. That's the vaunted 2014 NBA free agency class.

For the record, Marc Gasol, Rajon Rondo and LaMarcus Aldridge are all unrestricted free agents in 2015, and Kevin Love will almost certainly decline his $16.7 million option. Maybe that's the year to look forward to...