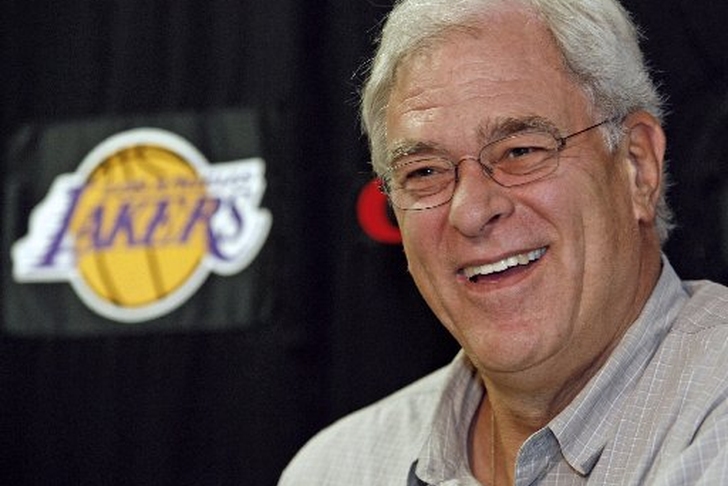 Lakers Executive VP Jeanie Buss and her fiancé, the one and only Phil Jackson, fielded questions from reporters for some 20 minutes last night at a Time Warner Sports Network event in Los Angeles. Lakers fans, of course, have been crying for Jackson to return as coach of the team since Mike Brown was fired just five games into the season (actually longer than that, to be honest). The Lakers instead hired Mike D'Antoni, whose performance we need not go into here.

But Jackson remains in an unofficial role with the Lakers, if for no other reason than his relationship with Jeanie Buss.

"Phil is a part of the organization because of me," said Buss last night. "He’s part of my life and part of my family. He’s always in Laker world, no matter if he has an official position or not."

"Even though he doesn’t have an official role with us, he’s a consultant of sorts" said Kupchak. "Jeanie, I’m sure, talks to him at night about basketball. I bump into him from time to time. So even though it may not be official, there is an existing relationship."

According to Kupchak, Jackson visits the Lakers practice facility in El Segundo frequently. And Phil himself sounded like more than just a spouse.

"I’m just supporting Jeanie and the decisions that are important for the ball club to make,” said Jackson. "Trying to find a way to bring the team back to prominence through getting the contract resolution going, signing the people they have to sign, and finding ways so that they can be mobile enough that they can have the talent that they have to have soon."

By the sound of that, he is still very involved in the back-room workings of the Lakers. Jackson even said he had talked with Kupchak in the last few weeks, "just bouncing things around." And even if he doesn't have an official say, you can bet Buss, Kupchak and the rest of the brass are interested in his thoughts.

Chat Sports: Get all of your Los Angeles Lakers Rumors & Breaking News here