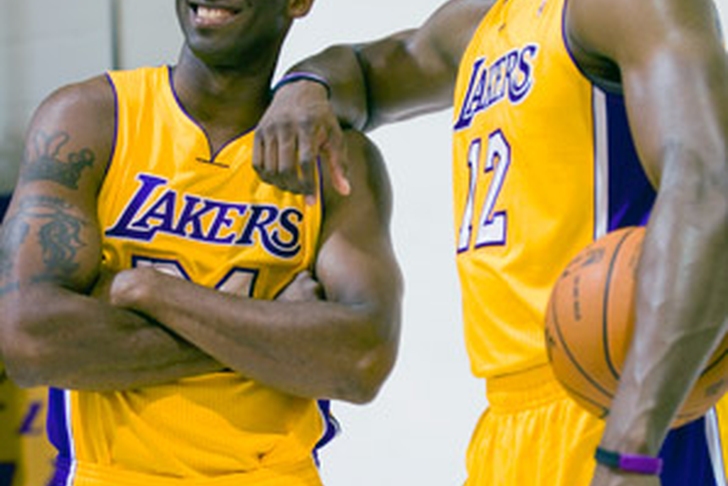 The day is here. It's Dwight Day for the Lakers. D-Day, if you will. After months of campaigning and tweeting and billboards and whatnot, the Lakers will make their formal presentation to Dwight Howard today as to why he should re-sign with the team he apparently hates.

Notably absent is much of the Lakers storied past. Magic Johnson is away on vacation, as is Phil Jackson. But there are still plenty of other icons the Lakers could have called upon, as the Rockets did in bringing Hakeem Olajuwon to their sales pitch on Sunday. However, according to Lakers beat writer Mike Bresnahan, Los Angeles chose to go in a different direction.

"The Lakers considered adding some of their legendary names to the meeting but decided against it, looking toward the future instead of the past," wrote Bresnahan in the L.A. Times.

The future, such as next offseason, expected to be one of the biggest in recent memory. More Bresnahan:

They will sell themselves as the 16-time NBA champions — how could they not? — and they also subtly will remind him Steve Nash is the only player currently under contract after next season.

As in, there's a massive shopping spree on the way in a year.

Jeanie Buss is not expected to be there, but like Magic and Phil still had a message for Howard:

Los Angeles' usual trump card - the fact that they are the Lakers and no one else is - won't work this time around. Howard does not enjoy the pressure felt in Los Angeles from both media and fans, and Houston would be a welcome respite on an equally competitive team. The Lakers can offer him one year and some $30 million more than any other team, but per year it only breaks down to about $1.5 million extra ("only"). What L.A. will have to sell this that they truly are the best fit for Howard's basketball future.

The Lakers, per their own request, are presenting last out of the five teams who are in the final running for Howard's services. The Houston Rockets, widely thought to be the frontrunners, went first on Sunday evening, but not before Lakers general manger Mitch Kupchak got in a quick "hello and good luck" meeting of his own.

The Atlanta Hawks and Golden State Warriors went Monday, but neither are considered realistic options for Howard. The Hawks got consideration as Howard's hometown team, and the Warriors because of a potentially lucrative sign-and-trade they could offer the Lakers, despite Los Angeles saying repeatedly that they are not interested.

The Dallas Mavericks are meeting with Howard Tuesday afternoon, and the Lakers followed in the evening. Afterwards, members of the Lakers delegation said they were pleased with the meeting.

Kupchak: "We told [Howard] how important he is to the Lakers...and why we feel this is the best place for him to continue his career."

Nash on meeting with Howard: “I think the Lakers did a great job and it was a really good meeting. I feel really positive about it.”

Howard does not want the process to drag on, and is expected to sign on July 10, the first day he can per NBA rules.