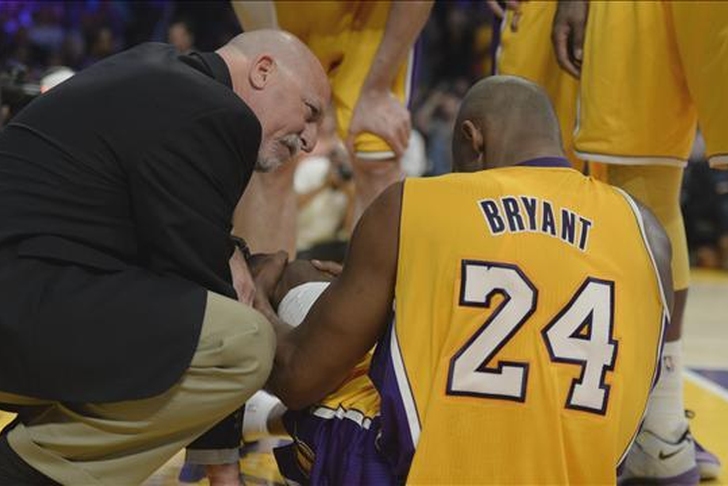 The physical plight of the Los Angeles Lakers was much-chronicled this past season, even before Kobe Bryant's torn achilles. Dwight Howard had back surgery before the season, Steve Nash fractured his fibula in the second game of the year, Steve Blake had an abdominal tear, Pau Gasol got a concussion, Jordan Hill tore his labrum, Metta World Peace tore some cartilage in his meniscus and kept playing anyways, Bryant sprained his ankle several weekes before the tear and then Jode Meeks sprained his ankle in the opening game of the playoffs.

Exhausted? You bet. So was Lakers head athletic trainer Gary Vitti, who has held the position since 1984. He sat down with NBA Lakers reporter Mike Trudel to discus this most trying season for him.

Vitti went in-depth with Trudel on the total flukiness of Nash's fracture, the understated impact of Howard's back injury, and much of a toll NBA minutes can take on a body.

That list bit was a lead up to an extensive talk on Kobe Bryant's achilles tear: how it happened, what might have been done to prevent it, all of the second-guessing that has occurred since then (including what Vitti himself has second-guessed), and of course, Bryant's recovery and maniacal work ethic.

It's all quite illuminating and gives an insightful inside look on the Lakers' struggles and Bryant's recovery that even Kobe himself couldn't provide.