Los Angeles Lakers: Having fun being mediocre for the future 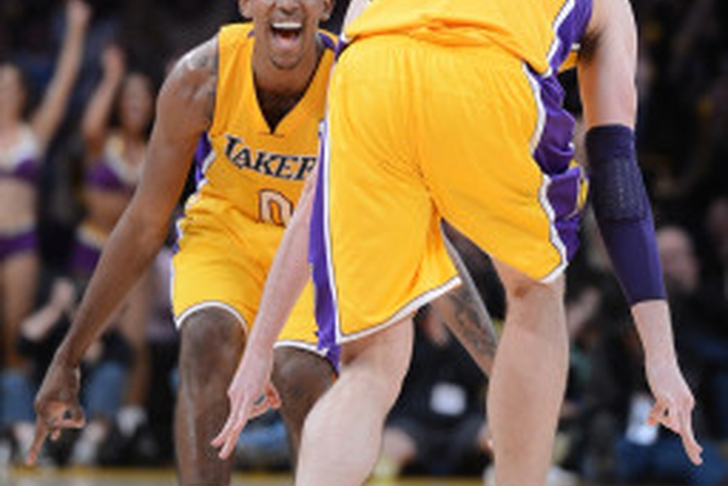 With just under four minutes to play in the fourth quarter against the Timberwolves last night, Nick Young and Pau Gasol exchanged a brief, but telling moment of smiles as the Lakers improved to 13-13 on the season. For the first time in six games, it looked like the Lakers--even Mike D'Antoni--were back to having fun playing under with one another and it led to a much needed night of cheers at the Staples Center.

Before this game, the Lakers boasted a 2-4 record since Kobe Bryant's return against the Raptors.

Despite losing Bryant for up to six weeks last game to a fractured lateral tibial plateau, the Lakers managed to pick up a win (without a true point guard) and did so in a fashion that was enjoyable to watch. And while the Lakers may not necessarily be on track to being a playoff team, the manner in which they played told a lot about which direction the Lakers need to head to during a time of uncertainty.

As of now, capturing the eighth seed should not be their goal. Rather, it should be to play as a collective unit like they did last night and gear up for what will likely be a 180 degree turn for the Lakers in the upcoming offseason. Bryant will never be content with missing the playoffs, but it is the best course of action for a Laker team that--with the current roster--won't be anywhere near playoff contenders.

For the Lakers, this season has been a mixture of emotions to say the least. On one hand, the limited roster has performed admirably in the absence of Steve Nash and Bryant and on the other, it's been a disappointment for fans who were wishfully hoping for a short playoff run under their two-year $48.5 million superstar.

But for those that have been pleased with the emergence of players like Xavier Henry (10.0 PPG), Nick Young (15.3 PPG) and Wesley Johnson (8.2 PPG), this season has been more about appreciating what the Lakers have, not lamenting on what would be a distant run for an eighth or seventh seed. With teams like the Blazers, Thunder and Spurs roaming the top of the Western Conference, it would be best for the Lakers to miss the playoffs this season and submit any entry they can for the all-important 2014-2015 draft.

As the Lakers continue to grind out the remainder of the season, there will surely be a fair share of ups and downs. But amid their struggles, the Lakers can be happy with performances like they had against the Timberwolves where four different players scored over 15 points. No one expected the Lakers to have some magical season and it's likely going to remain that way for the remainder of the year.

So as Bryant sits out the next four weeks, remember that being .500 and out of contention for the playoffs is more good than bad. This season should not be labeled as tanking, but rather getting what you deserve and hoping for the best.