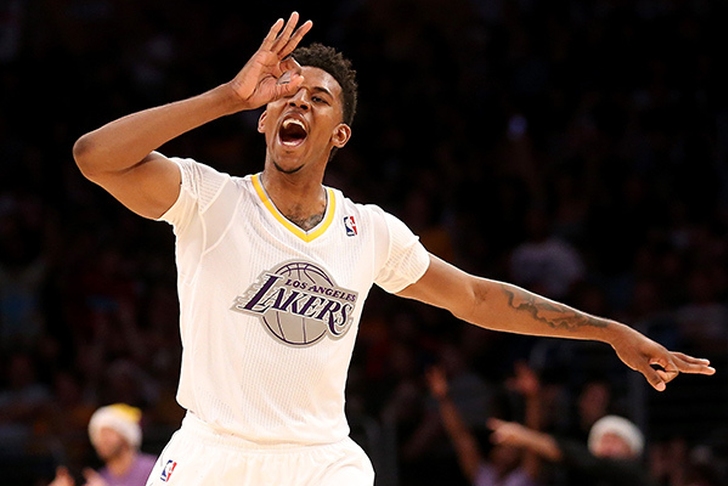 The Lakers currently have 53 games remaining on their schedule this season and rank 12th in the Western Conference. Figure that in with potentially not reaching the post season and it may already be time to start looking ahead to the next year.

While the injured Kobe Bryant will likely make a return at some point within the expected 4-6 week time range and try to push for a playoff seed, the Lakers should shift their focus towards which players they should keep for the 2014-2015 season rather than worry about being knocked out in the first round. With the possibility of bringing in another max player alongside Bryant next season, the Lakers number one priority should be to start thinking ahead towards the future. This will begin and end with filling their roster with some of the current players in hopes of attracting big-time players.

For the Lakers, this essentially points to deciding whether or not to keep players like Nick Young, Xavier Henry and Wesley Johnson, all of whom signed short term contracts heading into the season and have performed well under the circumstances. Much of the Lakers bench has exceeded expectations this season and it has actually led them to being the second ranked scoring bench in the league.

With only four players in Steve Nash, Young, Robert Sacre and Bryant inked onto the Lakers depth chart for next year, it will surely be a long, but interesting process to see which players stay and go following this season.

Swaggy P has been on an offensive tear to say the least. With the absence of Bryant on the floor, Young has led the team in points (15.7 PPG) and has molded into one of the leaders for an injury plagued Laker team. Young not only leads the league as one of the best worst-shot makers, but his relaxed demeanor has been reflected through his teammates throughout the season. He may not be your preferable second or third option, but he is a player that can light a spark off the bench; something the Lakers can definitely use down the road. If only he could figure out a way to play some defense.....

During the 22.1 (MPG) that Xavier Henry plays, the Lakers have found the former first round pick out of Kansas to be an invaluable asset off the bench. Henry has proven to be a two-way player and has fit right into Mike D'Antoni's up tempo offense after struggling to find his own with Memphis and New Orleans in his first three years. With a present upside and willingness to play hard on the floor, Henry is a player that the Lakers should look to keep moving forward.

The stats may not necessarily allude to a notable season, but Wesley Johnson has been a formidable forward for the Laker rotation this season. Johnson was initially brought in for his talents on the defensive end, but his .375 percent shooting from beyond the arc and 8.1 (PPG) have come as a pleasant surprise. The Lakers may not see the real need to resign the 26-year old Johnson next season, but it wouldn't hurt to do so based on his early season stats.

For the past two years, Jordan Hill has been the prime example of a player that plays well and hard without the ball. Hill seems to grab every loose ball as well as boards for the Lakers and it is something that can't be overlooked. With the digression of players like Pau Gasol and Chris Kaman, the Lakers may not have any choice, but to give Hill an extension while they search for a starting big man. But in the meantime, Hill isn't a bad option by any means.

It has been a coming out party for the former guard out of Kentucky. Jodie Meeks is having his career-best season statistically and it has directly translated into countless jumpers this season. Aside from Nash and Young, Meeks has been the the most reliable outside shooter for the Lakers and it will be hard to ignore come time to sign extensions. Meeks may not ever be a starter in this league, but his outside shooting will allow him to log minutes for the rest of his career.

You may not believe the following stat, but Steve Blake is the leading the team with most minutes per game (31.9). Blake has served as the primary ball handler alongside Farmar and has boasted a stat line that is bordering a starting NBA point guard. But with the struggles with a lingering torn ligament in his right elbow, Blake may not be stable enough to keep around for the coming years. For now, Blake is what he is: a guy that can knock down open shots and handle the ball while an aging future hall of famer (Nash) eases his way back onto the floor.

Despite the early problems with injuries, Jordan Farmar has proven he can still play viable minutes in the NBA. Farmar has received a good chunk of playing time in the absence of Nash and has played well when healthy. But with the uncertainty of the Lakers future under Mike D'Antoni, the Lakers may be better off looking elsewhere when it comes time to fill the roll of back-up point guard. Farmar has been welcomed back with open arms to a place where he has won two championships, but it may not be be worth anything more than that.