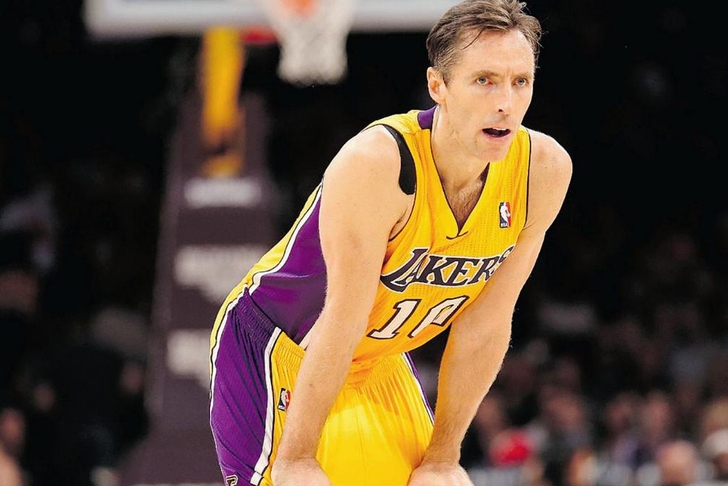 If you're surprised that the Lakers are 4-6, you haven't been paying attention.

As they're currently constructed, the Lakers aren't going to win many games. To be perfectly honest, going 4-6 with this set of players is impressive.

Throw away the banners, the bright lights and the tradition, and there isn't a whole lot left. As it stands, the Lakers are trying to build a sports car out of a bunch of spare parts they picked up from the junkyard. Mike D'Antoni's brand of basketball relies on fast-paced offense run by players who can intelligently space the floor, and that's just not possible with the players he has at the moment. D'Antoni is trying to play a death metal song on a banjo.

The Lakers are well aware that even a healthy Kobe Bryant and a functional Steve Nash don't turn this team into title contenders. Best-case scenario, they're first-round fodder for San Antonio, Oklahoma City or Golden State.

Remaining mediocre is out of the question. Getting stuck in a cycle of 35-45 win seasons is unacceptable, and the front office is well aware. If LA is going to return to contention in the near future, they have two options:

No one wants to admit it (least of all Kobe), but the Lakers might be best served by sacrificing this season for the sake of the next five. Add a top-3 draft pick to this roster, fill out the bench with role players, and suddenly you're right back in the mix at the top of the West.

The Lakers front office might have too much pride to seriously consider tanking. It's an open secret that Kobe has almost as much control over the direction of the franchise as Mitch Kupchak at this point, and keeping him happy is paramount. If Kobe isn't interested, the Lakers aren't interested.

Refusing to tank means making moves. Even though we're just over two weeks into the season, there have already been quite a few possibilities mentioned - let's take a look at each one.

Trading Pau Gasol to the Grizzlies for Zach Randolph

Let's make one thing clear right off the bat - Randolph isn't a long-term solution. D'Antoni's system requires an athletic big man to run smoothly (think Amar'e in his prime), and "athletic" is not a word that's ever been used to describe Z-Bo.

We talked a little bit about what makes this trade so appealing yesterday, but here's the sparknotes: Gasol isn't getting any younger. Memphis values him more highly than the rest of the league, and there's no denying that what Randolph brings to the table (elite rebounding, size, reliable scoring) is superior to what Gasol can do at this point. Randolph has been pining for a return to a major-market team since he left the Knicks, while Gasol has struggled with the pressure that comes with that kind of responsibility.

The Grizzlies would love to reunite the Gasol brothers in Memphis. The Lakers would love a short-term upgrade who relishes the opportunity to perform in front of an audience. The Lakers might need to tinker with Randolph's contract (he has a player option for 2014-15 that could impact LA's chances of signing an impact free agent), but if they can resolve that situation, this should be a no-brainer. Kobe loves Pau like a brother, but he's too smart to block a trade that could help his team and revive Gasol's career.

No formal discussions have taken place yet, but both teams are aware that there's mutual interest. LA has every reason to make this happen, and I think there's a solid chance they do.

Steve Nash to Toronto for...

The Raptors want Nash. That isn't up for debate. Nash has been hampered by injuries, and while he's resumed light shooting drills, his future with the Lakers is up for debate.

As a massive Steve Nash fan from the beginning, this is painful to say...but he can't start for a contender anymore. The vision and the passing are still there, but the movement is long gone. Nash was never a stopper on defense, but at this point he's an outright liability - put him up against Steph Curry, Russell Westbrook, or Tony Parker, and the Lakers are getting torn apart.

Having Nash (and his $9.7 million contract that doesn't expire 'til the summer of '15) ride into the Canadian sunset is in LA's best interest, but the big question is who they'd get in return.

Rudy Gay is out of the question—there's absolutely no universe where he and Kobe can co-exist on the same team. Mike D'Antoni loves fast-paced offense, but there just aren't enough shots for both of them.

A much better option for the Lakers would be to pick up a solid point guard and a disposable big man with an expiring contract...and the Raptors have an exact match. Kyle Lowry is an immediate upgrade at PG, and Aaron Gray (and his expiring contract) would help the Lakers improve in the short-term. The Raptors are just too good to tank, but trading Lowry for Nash would let the Raptors bottom out for Andrew Wiggins, who Nash could mentor next year.

The Raptors are clearly interested. The Lakers have kept very quiet about the possibility of trading Nash...but we think they'll pull the trigger if Toronto is willing to deal Lowry. Keep a close eye on this one.

Acquiring Odom would be a massive roll of the dice...but the Lakers aren't going to return to contention without taking risks. If Odom can put his demons behind him and keep the Kardashian sideshow at a safe distance, he can help this team. Any contract the Lakers offer should include an escape clause for LA and be structured around play incentives, and it's on Odom to prove that he can still contribute.

If the Lakers want to return to title contention while Kobe Bryant is still around, they'll need to gamble. These three moves all involve calculated risks, but the alternative—getting stuck in neutral—is far worse than bottoming out.

Jake Foster is a Senior NBA columnist for Chat Sports