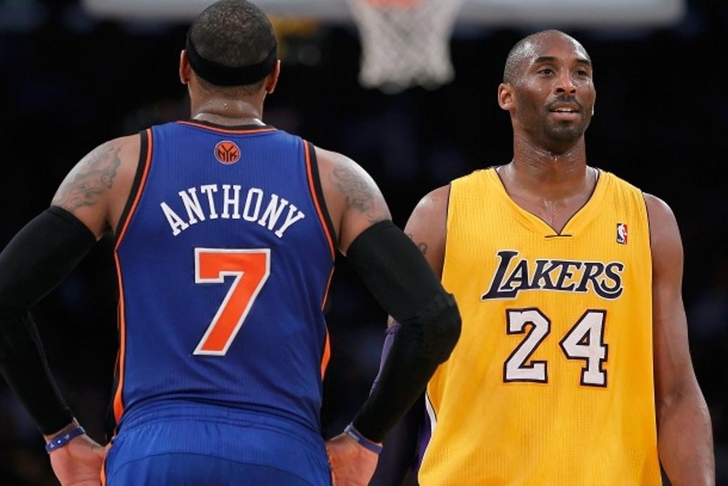 With the NBA Draft firmly in the rear-view mirror, this Lakers Rumors Roundup will focus on the upcoming chaos of July 1st's opening to the 2014 NBA free agency period.

Kupchak on Kobe & FA: "I would not be surprised if Kobe reaches out or free agents reach out to Kobe."

In fact, Kupchak might also use Kobe's stature in the league in order to help the GM get in the ear of targeted free agents as the summer wears on.

As has been evidenced before, a happy Kobe makes a happy home at the Staples Center - so this could go very well for the Lakers and Lakers fans.

Per Yahoo! Sports' Marc Spears (via Corey Hansford of Lakers Nation), the Los Angeles Lakers could know within a couple of weeks if Carmelo Anthony believes Hollywood is right for him:

New York Knicks forward Carmelo Anthony hopes to make a decision on where he will play next season in the second week of July after taking several free-agent visits, a source told Yahoo Sports [...] A source said there is currently no frontrunner for Anthony’s services, and he is expected to meet with the Knicks, Chicago Bulls, Los Angeles Lakers, Houston Rockets and Dallas Mavericks.

Also per Spears' report, Anthony is not expected to meet with any other teams than the five mentioned - which would leave the rumored Miami Heat scenario as dead in the water.

Therefore, it looks as if the Lakers are on the shortlist for Melo going into what will be a wild July.

With LeBron James and Carmelo Anthony set to hit the open market, one of their own free agents, Pau Gasol, seems to have been lost in the shuffle.

Yet, according to ESPN's Ramona Shelburne, the Lakers are still very adamant about wanting Gasol back - at least in the short-term:

Lakers have a strong interest in resigning @paugasol .. but obviously have sights on LBJ/Melo right now

How the Lakers fare in their pitches for James and Melo could very well have a direct impact on whether they are willing to fully spend the cash to retain Gasol.